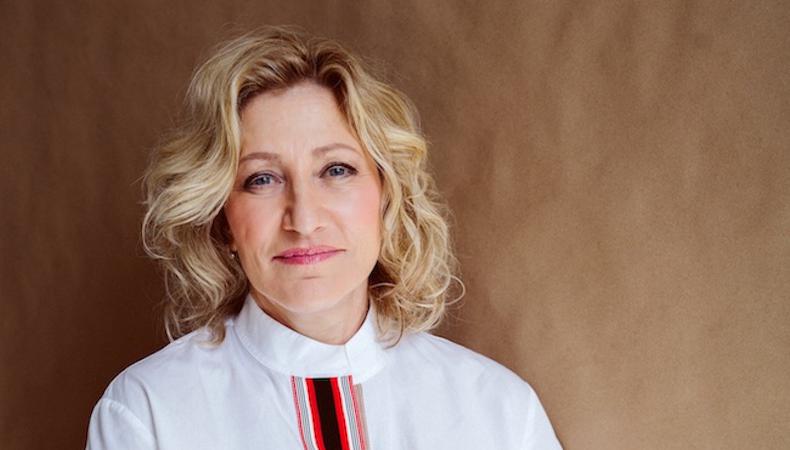 Edie Falco is one of the few actors today who’s by and large synonymous with the golden age of television. Having garnered critical acclaim (and Emmys and Golden Globes) for her work on “The Sopranos” and “Nurse Jackie”—plus turns on “Oz,” “30 Rock,” “Horace and Pete,” and “Law & Order True Crime”—she knows a thing or two about how to make a career last on your own terms. Her résumé also boasts a number of standout indie features, the latest of which is Lynn Shelton and Jay Duplass’ “Outside In.” She stars as Carol, a high school teacher who develops an unusually close relationship with one of her ex-students, Chris (Duplass), while helping him continue his education in prison. Then he’s released at age 38 with nowhere to go, and the lines of their friendship (and her own marriage) begin to blur. Falco sat with Backstage March 22 to discuss the film and to offer insight into her process and on the importance of finding your own way.

Carol and Chris’ relationship gave her plenty to play with.
“He was a student of hers in high school, and he was wrongly imprisoned, and I think she started out by helping him get through the experience of being in jail by giving him assignments and keeping his brain active. Over time, it developed into something different, although, you know, it’s unspoken what that may mean to him or to her or if they ever talked about it or admitted it to each other or to themselves—all that stuff is unknown as we start the movie.”

READ: Edie Falco Says You Should Quit Your Survival Job

Falco looks for naturalism and negative space in the projects she chooses.
“[Lynn Shelton and Jay Duplass’] writing [in ‘Outside In’] is smart and it’s the way that people talk. There’s so much that’s not said, which is imperative for me to enjoy a moviegoing experience. It’s got to be, to a large degree, about what people don’t say to each other.”

Traditional backstory and character analyses are more likely to trip her up than help her.
“I don’t do well with a lot of talk, frankly. I find it confusing, and if it does feed my idea of who the character is, I’m not aware of it. For me, you discover it as you go along. Each scene has its own trajectory, and together, the whole thing starts to take on a life. [And backstory] doesn’t help me, but I’ve been privy to many people who like to give a backstory, so I will dutifully listen because it seems to help them. Frankly, I find it makes my brain cluttered. I can no longer listen to my own information if I’m trying to take [all that] in. It ruins my connection to whatever it is that tells me what to do.”

It took her working professionally to find comfort in her personal acting practice.
“I went to an acting school where there were 30 of us, and there were a number of students in the class who were such good students. They could explain exactly what their process was. They were so good at verbalizing all this stuff, but they were completely uninteresting to watch. It took me a long time to realize there’s possibly a connection there where if you’re using too much of that part of your brain that knows how to verbalize, the other part is probably dormant. You need to keep the talking part quiet and listen to whatever happens [in your heart] that tells you about this character. For a long time, I just thought I was doing it wrong. There’s certain people who know how to act from a more intrinsic level than an intellectual one, and I think that’s definitely my lead mode.”

Early successes don’t always mean smooth sailing.
“I got to do a movie [called ‘Sweet Lorraine’] the day after I graduated college, I had to be on the set, and I thought this is smooth sailing. It was incredible. And then you sort of think, Oh, this is the way it’s gonna go, and it was not the way it goes. It was many, many more years—you know, those middle-of-the-afternoons a year and a half after that movie closed, realizing, ‘I’ve gotta get a waitressing job.’ I’m just getting anxiety even talking about it. I don’t know if that ever goes away. There’s the part of me [though] that knows that this is not the end. I remember Paul Newman came backstage to see me at a play, and we were talking, and he did say, ‘As I finish every single job I’m doing, I’m sure it’s the last one.’ And this is Paul Newman, so I figured, All right, I’m in good company and chances are, none of us are right about that. If this is what you decide what to do with your life, it’s what you’re going to do with your life. There really is nobody who can tell you you can’t or you won’t. It depends on how quickly you want to throw in the towel, because it’s not always fun, and the dry spells can be difficult.”

Stop worrying so much.
“I never knew what I was doing from moment to moment, I just thought, What’s in front of me is the possibility of doing this script. Yes! I’ll do this. And that’s what you do. I still am not good at, Well, you should cast yourself this way so people will see you [this way]. Please. I don’t have any social media, I don’t know anything about that stuff, which is neither good or bad, it’s just not for me. You just do what you love to do, and there’s no way it will not lead you to where you’re supposed to go. Or at least that’s been my experience. But if I could look at the younger Edie, who’s always in a panic about money, mostly, and how it was going to work out, I’d tell her, you know, ‘It’s gonna work out. It will work out.’ It’s just the way it is.”

Backstage was her weekly guide when she was getting her start.
“I never really planned on making a ton of money, I just knew this is what I was going to do. And so it was Backstage a zillion years ago that you get from the little corner place that sells magazines or newspapers, and I would find any audition, anything I was even a little bit right for, and I would go in and I would try out a new monologue. Or even just sitting in the Equity lounge or wherever it was that you got together to be with other actors. It was the environment and the community that I wanted to be in, period. And there was always something to do. There was always a play to work on or a workshop to participate in. If you’re telling yourself that you have to be a successful actor, meaning to make a ton of money and be famous—I don’t know. Good luck with that. I think that’s a hard way to focus. But if what you really love to do is acting, it doesn’t matter how much time is between jobs because people will always be writing plays and making movies.”

And our notices got her cast in New York—once.
“Once, only once. But the idea that there was so much going on—you could read column after column of these auditions, and I would circle them and schedule them so that I could go from one to another during periods where I had that kind of freedom. Just negotiating my schedule as if it was a performance schedule. I found that very freeing and very enjoyable.”

She always hated auditions, but made the most of them.
“I always hated it. At a certain point, once I could let go of the idea of, ‘This is only a success if I get the job,’ I actually sort of could go in and just have fun with auditions.”

Benjamin Lindsay
Benjamin Lindsay is managing editor at Backstage, where if you’re reading it in our magazine, he’s written or edited it first. He’s also producer and host of a number of our digital interview series, including our inaugural on-camera segment, Backstage Live.
END_OF_DOCUMENT_TOKEN_TO_BE_REPLACED