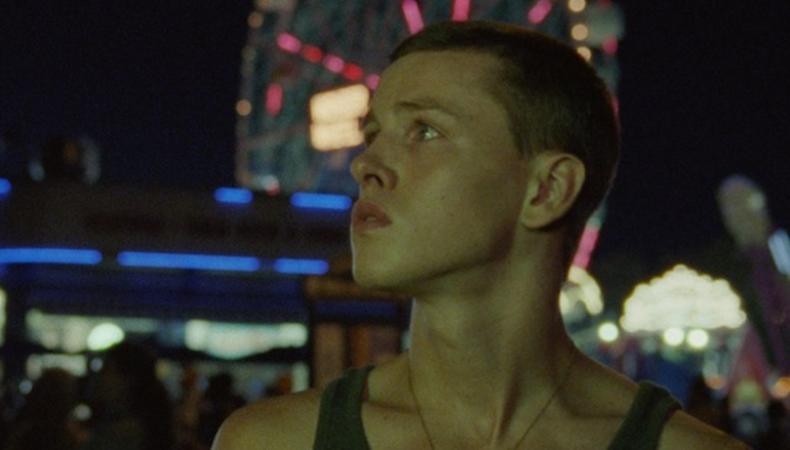 Eliza Hittman says she needed to find the “20-year-old Robert De Niro” for her sophomore independent feature, “Beach Rats.” With breakout U.K. talent Harris Dickinson, she may well have found him. As a “masculine companion” to her 2013 “It Felt Like Love” debut, “Beach Rats” tells the story of Frankie, a Brooklyn teen who’s coming to terms with his sexuality by dating the beautiful Simone (Madeline Weinstein) while simultaneously soliciting anonymous hook-ups with men online.

Hittman’s precision in navigating the complexities of teen sexuality and coming-of-age earned her a directing award out of Sundance this year and booked her a gig directing two episodes of Netflix’s teen drama, “13 Reasons Why.” She called Backstage during a brief break from shooting to discuss casting Dickinson, dealing with agents’ “phobic” response to the film’s material, and bringing Frankie’s story to the screen.

I understand you’re in the middle of shooting something right now, is that right?
“It’s true, it’s true. I’m north of the Bay Area doing two episodes of Netflix’s ‘13 Reasons Why.’ I’m immersed in a teen drama—another one.”

Well that seems in-line enough with “Beach Rats” and “It Felt Like Love.”
“Yeah, for sure.”

I guess just for starters here, what was it about the story of “Beach Rats” that first drew you in?
“Well, when I was shooting ‘It Felt Like Love,’ I had some cast members who were from a neighborhood in Brooklyn called Gerritsen Beach, and kids from Gerritsen Beach are called ‘beach rats.’ They are tough, not-so-nice kids who feel they’re cut off from the rest of the city in many, many, many ways in terms of opportunity, in terms of the way that they view the world. I thought it was interesting to kind of make a masculine companion to ‘It Felt Like Love,’ sort of exploring similar pressures on sexuality in a specific environment.”

You couldn’t have asked for a better lead with Harris Dickinson. How did that casting play out? He’s from England, so it’s not like he’s a local that you just plucked out of Brooklyn…
“Initially, I was trying to find an established actor and didn’t really attract much interest from people who were working more in the studio system. You know, agents were a little bit phobic of the material and we didn’t get very far in trying to cast a ‘name.’ I was thinking, Where is the 20-year-old Robert De Niro? This actor must be in New York, in the theater world or something. I couldn’t really find him there. And then I thought I would try and street cast the role, but obviously the material was too challenging to cast somebody who had never really acted in a film before. And I just went back to our initial round of open casting with our casting director and revisited Harris’ audition. You know, it stood out among the rest, I’ll say. He just gave a very simple but connected and deep performance in an audition tape that he had made himself from London. And he didn’t do a British accent. He just introduced himself in a standard American accent. He said, ‘Hello, I’m Harris Dickinson.’ It wasn’t until we started sort of figuring out who he was and where he was from that [we learned] he was British. But I took a shot and was very, very pleased with how effortlessly he fit into the world. Sometimes you cast the lead actor first and sometimes they kind of come— they’re the last piece of the puzzle, so to speak.”

For this role in particular, what was it that you were looking for? You mention a Robert De Niro type.
“I think compared to other audition tapes, the one that he made himself, he was sitting very close to the camera, and he had these kind of piercing blue eyes. He didn’t move around a lot. What he did was very minimal and very deep and very connected and heartbreaking. I think that a lot of other people who auditioned tried to sort of amplify their masculinity and it all read very false.”

That’s funny—I bet the self-taping prepped him a bit for the web cam work going into this film.
“[laughs] Yeah, but it’s not like I knew he has this, like, incredible body or anything from the work, from the tape that he made, which was essentially a close-up. So, you know, I found out things about him along the way and sort of made them a part of the character.”

You mention that at least agent–wise there seemed to be a phobia to this material. With the actors that you spoke with, was there a hesitancy at all to physically bare it all on camera?
“No, the actors that I met with or talked to were 100 percent in. Some of them felt like they trusted my instincts, but felt like things went too far—but trusted me. But for the most part, anybody that I met with was onboard.”

Was that a process to talk through with Harris at all?
“No, it wasn’t. It was a non-issue. I think that the script didn’t really hide anything. It was always on the page, so it’s not like I was asking for something that wasn’t already completely clear. And sometimes directors kind of go the other way, you know, they’re coy about what’s on the page, and then they ask actors to do things that aren’t explicit, and that’s where things get tricky.”

You’ve proven adept at working with teen or early-20s talent. Is that different at all compared to working with someone who may be a little more seasoned?
“What has been fun for me about working with young people is that they understand inherently what acting is doing, and they just kind of jump into things and just bring themselves to things in a natural way. Those are the kind of people and performances I gravitate to. I think as you get older, you get more focused on process and you can get in your head a little bit more and there’s more conversations, I guess, to be had. As people sort of mature into their careers, they can have more questions about the material. Younger people just kind of dive in, from what I observe. But neither, you know, it’s not bad to have questions or to think about things or to want to talk about things. I just think that there’s something fun about the spontaneity of working with young people where they’re less driven to understand, like, the psychological causality of things. They trust their instincts.”

With Harris specifically, was there a lot of dialogue between you two about the characterization of this guy? Or was it more him just diving in?
“We had a week of rehearsal where we talked through every scene and what my vision for every scene is and what the tone of what we’re doing is. And then you start shooting, and you can kind of shape and shift things as you go, but there were no heavy conversations happening along the way.”

Have you always been the sole creator of your work? Have you always been writing and directing?
“No, and I still hesitate to call myself a real writer. I have a little bit of an imposter kind of syndrome when it comes to that, because, I don’t know, I just don’t have total confidence in my abilities to write. But I started out more in the theater world and really as a director wanting to work on new plays. And I didn’t really see a lot of opportunity for women, to be honest. And I didn’t really understand the relationship between playwright and director. It was such a writers’ medium. I would do a production that I would put a lot into, and people would be like, ‘The play is amazing!’ And I would be like, ‘Well…what about the directing?’ So I sort of started out in the theater world and found that relationship to be very flawed. And then I went to graduate school to study film and art and I wanted to try and build that [writing] muscle for myself so I wasn’t relying on a writer to give me material to work from.”

What has your experience of going from independent film to a hit Netflix series been like?
“Part of the reason I was drawn to it, obviously, was because of the content. I was excited that there was a show in the world that was speaking to so many 14-year-old girls. I think that there’s a hole in all our media that really speaks to that audience. And I wanted to kind of push myself. I’m not sure that I have a studio film in me in the next couple years, but I wanted to push myself to understand how that type of set works. I’m a, I would say, petite woman at 5’1”, you know, and the experience of being on a set that’s largely being operated by middle-aged white men is intimidating, so I wanted to be able to sort of find my voice on a larger production and have an opportunity to work on something that I believed in, and also get the experience of having more tools to play with and figure out if I could run one of these shows myself. I’m looking for that kind of perspective.”

What advice do you have for other female filmmakers who want to make inroads into the industry?
“I think you have to sort of watch movies, study film history, and find your voice on the page and try and work with people who share similar sensibilities. It’s a very collaborative medium, obviously, and finding people who share interest is really critical. I couldn’t have made this movie if people didn’t believe in my sensibility.”

Ready for the movies? Check out Backstage’s film audition listings!

Benjamin Lindsay
Benjamin Lindsay is a senior editor at Backstage, where if you’re reading it in our weekly magazine, he’s written or edited it first. He’s also producer and host of our inaugural on-camera interview series, Backstage Live, taking informative deep-dives with actors across mediums to discuss their craft, their work, and their advice for others getting started in the field.
END_OF_DOCUMENT_TOKEN_TO_BE_REPLACED