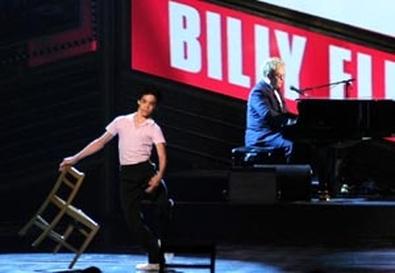 The trio — David Alvarez, Trent Kowalik and Kiril Kulish — traded off thank-yous during their acceptance speech, shyly thanking people associated with the show only by their first name. They also acknowledged siblings and parents. Finally, Kulish told the cheering crowd at Radio City Music Hall: "We want to say to all the kids out there who might want to dance, 'Never give up.'"

"Billy Elliot" collected eight other awards, including director of a musical, book of a musical and choreography, but its composer Elton John was upset for best score. That award was taken by "Next to Normal" — which seemed to stun "Normal" composer Tom Kitt and lyricist Brian Yorkey. Alice Ripley, who portrays battling mental illness in "Next to Normal," received the actress musical prize.

"God of Carnage," Yasmina Reza's savage comedy of manners about two liberal, middle-class couples whose children get into a fight, was named best play and picked up two other major awards, one for its director, Matthew Warchus, and the other for actress Marcia Gay Harden.

Reza, who previously won a best-play Tony for "Art," said: "Maybe you missed my accent; you wanted to hear it again. I'm very grateful for all the people who gave their best for the production."

"The Norman Conquests," Alan Ayckbourn's trilogy, received the revival-play prize, while "Hair," the iconic 1960s rock extravaganza roared to a win in the musical-revival category.

The director/musical award went to Stephen Daldry of "Billy Elliot."

"I have been blessed in my life to spend the majority of last 10 years of my life working on the story of 'Billy Elliot,'" said Daldry, who called it "a long, extraordinary journey."

He said the award belonged to everyone connected to the show and especially to "three great gifts of Broadway, our three little Billys."

"Billy" also received prizes for featured actor (Gregory Jbara), sets, lighting, sound and a tie with "Next to Normal" for best orchestrations, which Kitt shared with Michael Starobin.

Angela Lansbury received her fifth Tony, this time for her performance as the dotty medium Madame Arcati in a revival of Noel Coward's "Blithe Spirit." Her win in the featured-actress category tied the record for acting prizes held by Julie Harris, who has five plus a special lifetime achievement award given in 2002.

"Who would have thought," the 83-year-old Lansbury began, drowned out by a standing ovation. "Who knew that (at) this time in my life that I should be presented with this lovely, lovely award. I feel deeply grateful."

"Did you know that I was born on this street and my mother thought there was something special that her hospital room had a great view of the Winter Garden marquee," Herman said. "Well, here I am 77 years later, still on 50th Street but enjoying the ultimate moment of my life."

"The only way I know how to say thank you to hundreds of thousands of people who helped get me here is to say one enormous heartfelt thank you to every soul who has touched my life in the musical theater," said the composer, who then quoted a lyric from his "La Cage aux Folles": "The best of life is now, is now."

An emotional Liza Minnelli accepted the prize for special theatrical event for her show "Liza's at The Palace."

"This is exquisite," Minnelli said, asking for a list of people to thank because she didn't think she was going to win. "Lastly, I want to thank my parents and the greatest gift they ever gave me, Kay Thompson," her godmother. Minnelli recreated part of Thompson's club act as part of her Palace entertainment.

Roger Robinson's portrayal of a mystical shamanlike character in "Joe Turner's Come and Gone" was honored with the featured-acting prize.

"It has taken me 46 years to come from that seat, up these steps, to this microphone," said Robinson, who thanked his mother in Bellevue, Wash., "who's 98 years old ... who encouraged me and raised seven children single-handedly."

Featured actress-musical went to Karen Olivo as the spitfire Anita in the revival of "West Side Story."

"I'm completely unprepared for this. ... I just want to dedicate this to everyone who has a dream," Olivo said, thanking the production's 91-year-old director, Arthur Laurents, and then dissolving in tears.

The Tonys twittered this year, with Mark Indelicato of "Ugly Betty" as the night's uber-tweeter from backstage. He offered such timely nuggets as "NPH's (host Neil Patrick Harris) favorite beverage while warming up for the start of Tonys? RED BULL, natch!" Jane Fonda, nominated for lead actress in a play, offered: "The trick is to be Zen about it. Winning is sometimes not the prize."

Bret Michaels injured himself in the show's opening production number when he rocked it out with a number from "Rock of Ages." The extent of his injury was not immediately known.

Attendance during the 2008-2009 season slipped a bit (to 12.15 million from 12.27 million the previous year) but not as much as was feared because of the recession. And grosses for plays and musicals actually were a bit higher than a year earlier, setting a record of $943.3 million.

The awards were voted on in 27 competitive categories by more than 800 members of the theatrical community, including producers, actors and journalists. The Tonys are presented by the League and the American Theatre Wing, a nonprofit service organization. The Wing founded the Tonys in 1947.