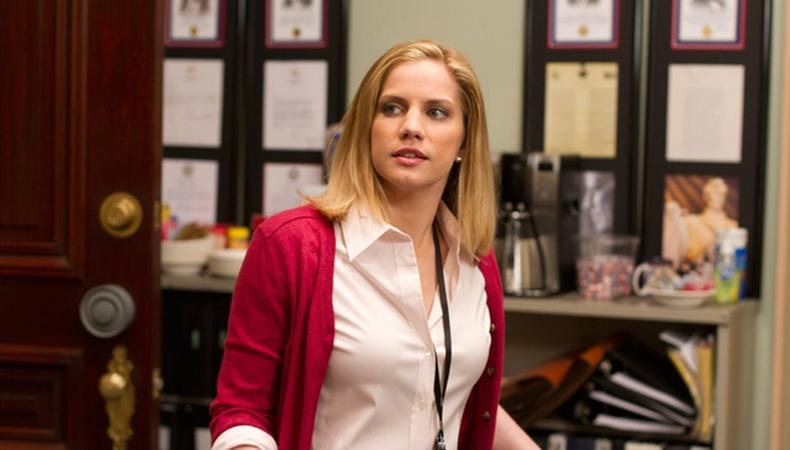 Anna Chlumsky is used to getting recognized, but lately, she’s especially happy to be approached about her work on HBO’s “Veep” instead of “My Girl.”

“It just feels so good to be noticed or recognized for something that you’ve done on purpose,” she says with a laugh.

And this year, the Emmys have noticed Chlumsky as well, giving her her first Emmy nomination for her role as Amy Brookheimer, chief of staff to Vice President Selina Meyer (Julia Louis-Dreyfus).

Amy is a hard-worker and go-getter, but this season on “Veep” we saw a lot more of her personal life, particularly her relationship with Ed. How has it been for you exploring more of her personal life?
It’s always a joy for me as an actor to add different colors to a performance and to discover more about the character, and we got a little taste of that this year with Amy because I think she doesn’t even think about her personal life. This season was about her having to see herself in a different light, even if it was just for a split second because she’s obviously still very busy and still very career focused. It was her first encounter with the other facets of her life and asking the question of whether or not they do exist and should they exist and should she even be paying attention to these other facets of her life. That was Amy’s little journey.

Amy’s very devoted to her job. Can you relate to her dedication as an actor?
The thing I probably relate most to is ambition. It makes complete sense to me that she has such a goal to really do her job her best and to leave the office that day knowing that she accomplished something and knowing that she really did her job. I think she rues any kind of day where she’s disabled to do her job, where something comes along that makes it more difficult for her to actually do a good job. There’s a lot of myself in that. I really like to pride myself on doing my very best at all times. That’s certainly something that I bring from myself to her.

Is there anything else you bring?
She doesn’t suffer fools very well. That’s certainly something I relate to as well. She can be pretty impatient, and I think that’s possibly from me as well. Something that’s different, though, and this is something I learned on the second season more than the first, is she’s not very respectful of others. She doesn’t really have a sense of, “Oh other people are just as deserved of things as I am. Let’s all be together and let’s all be one.” She doesn’t have that idea of life. She’s much more Machiavellian. She does see the world’s population as those who can and those who cannot, and those who cannot are just not worth her time. And that’s her. That’s totally her own thing. I get to put that mask on and pretend because personally, I just try to treat people with more respect than she does.

You work with a great cast of actors, and your co-star Julia Louis Dreyfus was just nominated for a record number of Emmys. What have you learned working with her?
Everybody works really differently so I’ve definitely learned a ton from everyone. With Julia in particular, she’s so precise in how she works. She really does give everything thought, and then in between “action” and “cut,” she is absolutely present and absolutely in the moment. The biggest thing I’ve learned from her so far and I’m going to continue to learn, I hope, is how to marry those two things. For me, I trust very well as an actor that the truth of the moment will lead you in the right way. That is something I still always stand by. Seeing somebody who can also trust the truth of the moment but also gives something enough thought that she feels that she can know the beats really well and be really well rehearsed and then leave it and then just trust the moment, I think that makes the truth of the moment even richer. She’s a wizard at that. It’s always worth watching and being a sponge around her.