Emmy Nominations: Elisabeth Moss on ‘Mad Men’ and ‘Top of the Lake’ 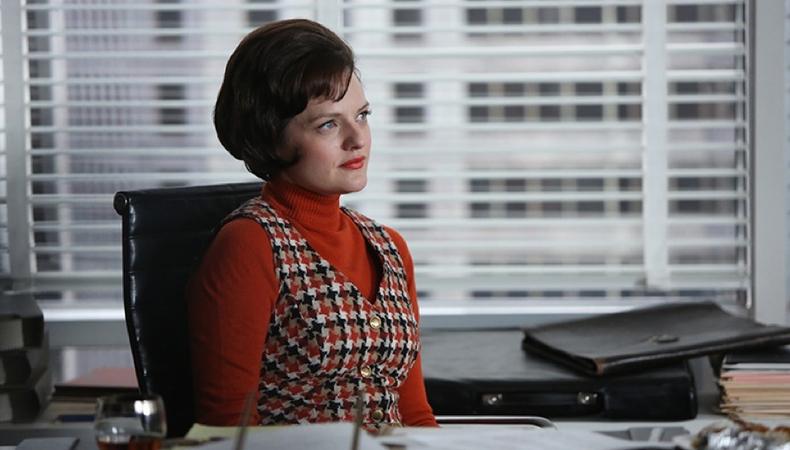 Elisabeth Moss was confused on the morning of Emmy nominations.

“I woke up kind of on the earlier side for me, and I looked at my phone and had a voicemail from my publicist, which is sort of unusual. She’ll usually text me or email me. So I listened to the voicemail and she said, ‘Double nominee!’ and I was so tired and hadn’t had coffee yet and was really confused,” she says with a laugh.

Moss earned her fifth Emmy nomination for her portrayal of Peggy Olson on “Mad Men” and her sixth nomination for “Top of the Lake,” a miniseries about a detective who investigates the disappearance of a pregnant 12-year-old.

“They’re both for very different roles, and as an actor, all you want to do is play different parts and do different things,” she says. “So for me, the fact that these two characters are so different and both were recognized makes me, as an actor, feel like I did my job.”

Everyone knows you for “Mad Men,” but can you share a little about how you got cast in “Top of the Lake”?
As soon as I heard it was [director/writer] Jane Campion, I wanted to do it because I’m a fan of hers as a director. She’s done incredible work with actresses and is known for getting these amazing female performances out of people, like Kate Winslet, Nicole Kidman, and Holly Hunter. I really desperately wanted to see what that was like. I met with the casting director Kirsty McGregor, who’s also nominated for an Emmy, and man, she deserves that nomination. I’ve never been championed by a casting director like she did for me. She [came out] to L.A. to meet with me and then she flew back out to L.A. from Australia to put me on tape for Jane. Those kinds of things to an actor are very meaningful, to be given that chance. I’m really eternally grateful for her.

You also had to do an Australian accent for the role. Do dialects come easy to you?
Not really! Not to this extent, no. I have a pretty good ear. I grew up in a musical family. I’m not totally a moron when it comes to hearing things and being able to duplicate them. It’s a very, very difficult accent, and I was very scared of it. I think I was the person who was the most nervous about it. Everybody seemed to think I could do it and I was like, “I don’t know, you guys!”

What did you learn as a performer working with Jane?
Jane puts a lot of trust in you. She considers it a collaboration. She puts a lot of faith in you, and it enables you, I think, to have more freedom and to trust yourself. And so I learned a lot about my own process and what I need and trusting myself as an actor. It was like the acting Olympics! I had to do so many different things every day and traverse the emotional spectrum every single day, five days a week, for 82 days. It’s like any art form. If you’re a musician, the more hours you practice the better you get. I had a lot of hours practicing on this!

This was also a huge season for Peggy on "Mad Men!" What were some of your favorite moments?
The line that I keep thinking about is when she says to Ted, “Well, aren’t you lucky to have decisions.” To me that really encapsulates her entire story, which is this idea of the woman in the workplace and how men do not understand how good they have it and how different it is for a woman in that time. To me that really sums up her whole story. I loved that line. It’s beautiful.

Matthew Weiner chatted with us a few weeks ago, and he said there was a scene where you wanted to cry but he wouldn’t let you because Peggy wouldn’t let Pete see her cry. How is it for you balancing Peggy’s professional and personal personas?
As an actor, sometimes those moments where you hold it in and keep it together and don’t actually let it go can be more powerful. It just depends on what’s true in the moment for the character. Often with Peggy, some of her most personal and most defeated moments are at the office, in public, and in front of other people. I like that challenge of having the emotion and having the vulnerability but having to hold it together. And I think that’s often a more powerful thing to watch. As much as it’s fun to cry and scream and go crazy, and I get lots of those moments in “Top of the Lake” so I felt like those were fulfilled. But she is constantly balancing being a woman in a man’s world. And as a woman in a man’s world, you don’t want to be the one who’s crying in the office. She learned that lesson in Season 1. Go into the bathroom if you want to cry. I think she’s a strong woman, and she’s become a stronger and stronger woman. That’s why I love that moment. She says it out of anger, and it’s so succinct, and she’s not sitting there bawling over the fact that her boyfriend left her and the guy that she’s having an affair with doesn’t want to be with her. She’s saying, “Fuck you. You have no idea how hard it is.” And that, to me, is more interesting.