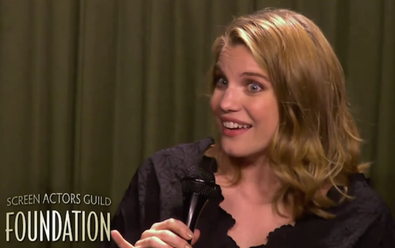 During her SAGF interview, the “Veep” star talked about her role as Amy Brookheimer, working with Julia Louis-Dreyfus, and terrifying her co-star Tony Hale while she was full-out rehearsing an emotional scene—“Like the good theater actor I am! I thought I’m going to rehearse as much as possible on my own!”

After taking a break from acting, Chlumsky said the biggest thing she wished she knew was, “Trusting that you’ll work; it’s so hard to believe when it’s been six months since you’ve been called in for an audition. But I think the sooner you can start trusting that this is your job and that there will be work, the sooner you’ll save yourself some grief.”