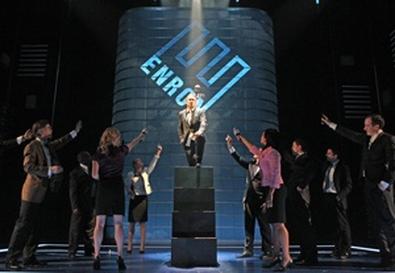 Photo Source: Joan Marcus
Playwright Lucy Prebble gets points for ambition. "Enron" wants to be a bold, slashing piece of political theater that exposes the greed and selfishness at the heart of American capitalism through the titular energy company's collapse. I'm in sympathy with her point of view but unpersuaded by her methodology. Her play is like a big, shiny, beautifully wrapped package that once eagerly ripped opened reveals a horde of Styrofoam peanuts through which you search vainly for the anticipated present.

Under the sledgehammer direction of Rupert Goold, "Enron," for all its singing and dancing traders, anthropomorphized blind rodents, "Star Wars" light-saber battles, milling trading-floor sequences, reels of period news footage, and endless streaming stock quotes, is just the story of four people: company CEO Kenneth Lay, his protegée Claudia Roe, president Jeffrey Skilling, and chief financial officer Andy Fastow. Lay, Skilling, and Fastow make up a toxic trio that leads Enron off the proverbial cliff, while Roe, who apparently was not involved in all the chicanery, gets lucky by losing a power struggle and being canned before the fan gets all messy. But though Prebble is convincing in her portrait of the business world's overweening misogyny and blustering macho attitudinizing, she hits those notes too hard and too often. These four seem to be ceaselessly barking at each other and us in their peculiarly arcane foulmouthed patois, which means we rarely if ever get to see the human beings underneath.

Prebble does a good job laying out what happened and manages to make pretty clear some complicated financial concepts—her use of lurking raptor dinosaurs, who occasionally interact with the principals, to show how a shadow company concealed Enron's staggering debt is inspired—but without flesh-and-blood people it's not enough to sustain interest. And because we all know what happened, Prebble can't rely on dramatic tension. She has to hook us with how and why, not what. It can be done, as Peter Stone brilliantly demonstrated with his book for the musical "1776." Of course, Stone accomplished it through character, something all the theatrical froufrou in the world can never supplant.

Norbert Leo Butz finds himself at the center of the maelstrom as Skilling, and he employs all of his considerable comic and dramatic skills to penetrate it. But the egotistic, self-obsessed Skilling is pretty hateful, and Butz lacks the material to make him fascinating. Marin Mazzie turns Claudia Roe into the standard tough-as-nails ice goddess but finds nothing new in the stereotype. Stephen Kunken's smarmy Fastow is most fun going a little loony as he cares for his Frankenstein creations, those debt-eating raptors, and Gregory Itzin gives the religious Lay the requisite courtly Texas manners that cover a multitude of sins, though Prebble leaves us unacquainted with them. The 13 supporting cast members go about their busy duties with professionalism, but only Lusia Strus, as an Enron employee whose life is ruined by the company's collapse, breaks out of the pack, in a highly emotional public confrontation with Skilling.

I'm a big fan of political theater, and I was really looking forward to "Enron." But to paraphrase some famous Brit, I only found sound and fury, signifying not a whole heck of a lot.