The 7 Ensembles That Wowed Us Onstage in 2015 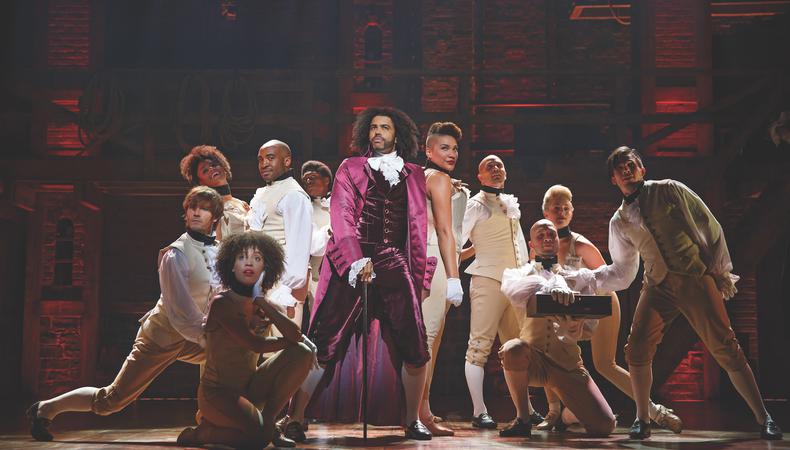 From the British royal family to a certain Revolution-era musical, these phenomenal groups of actors took the New York theater scene by storm in 2015.

“Clinton the Musical”
There was a shabby charm to New World Stages’ premiere of this wacky political operetta, which ultimately reflected the tumultuous era it depicted; the Clinton years, let’s face it, were a hot mess. Paul and Michael Hodge’s homage to Bill and Hillary, however, capably parodied the biggest scandal of the ’90s, thanks in large part to the most game group of actors Off-Broadway. The appeal of Tom Galantich, Duke Lafoon, Judy Gold, and Kerry Butler as everyone’s favorite would-be Madame President proved unimpeachable.

“Gloria”
Clever double casting featured heavily in Branden Jacobs-Jenkins’ twisted ode to office culture, which premiered this summer at Vineyard Theatre. But despite the impressively chameleonic efforts of Kyle Beltran, Catherine Combs, Michael Crane, Jennifer Kim, Jeanine Serralles, and Ryan Spahn, that’s not the reason this play had the impact it did. In the first act, a spot-on depiction of the print journalism industry’s mundanity, the cast collectively gave life to ordinary people, lulling the audience into a sense of security—until the play’s title was explained, in the most shocking onstage event of the season.

“Hamilton”
Even if you’re averse to hip-hop, history, or the emotions and ideas packed into Lin-Manuel Miranda’s revolutionary-in-more-ways-than-one musical about Alexander Hamilton, you can’t deny it’s a testament to the idea that the whole is greater than the sum of its parts. That ingenious music, Thomas Kail’s dynamic staging, storytellers whose roles have been written to their strengths—it all comes together with astonishing execution. Miranda, Leslie Odom Jr., Phillipa Soo, Renée Elise Goldsberry, Daveed Diggs, Christopher Jackson, and Jonathan Groff all light the stage ablaze. But taking the spectacle to the next level is the hardest-working troupe on the Great White Way, a deep bench of triple threats who must surely collapse from exhaustion after each show.

“The Legend of Georgia McBride”
Not enough words exist in a standard thesaurus to do this MCC Theater production justice. Fierce. Fabulous. Drag-tastic. They all fall short in describing the wonders of Matthew Lopez’s new play and its gloriously gifted cast. As a Florida-based Elvis impersonator who stumbles into the world of drag, Dave Thomas Brown transformed convincingly both inside and out, while Afton Williamson gave the story its heart as his expecting wife. And Matt McGrath, queen among queens, gave the performance of the year, hands-down. They all sparkled—and not just because of the sequins.

“The Humans”
There’s nothing showy about Roundabout Theatre’s Broadway-bound production of Stephen Karam’s new play, or the performances of its cast. The audience merely witnesses a family gathering at Thanksgiving, with all the attendant tensions, squabbles, and deeply felt affections such a reunion entails. But something disquieting exists just below the surface of each conversation, an anxiety more haunting than the Blake family’s money troubles or traumatized memories of 9/11. That this tightly knit company, particularly Reed Birney, Cassie Beck, and Lauren Klein, can convey that unease beneath even the most humdrum dialogue is a testament to their skill.

“King Charles III”
God save the cast of “King Charles III.” What makes the ensemble in this future-history play brilliant isn’t just their mastery of Mike Bartlett’s verse, or their ability to give each individual a distinct voice through that language. It’s the fact that as an audience, it proves difficult to take sides as the British royal family, following the death of Queen Elizabeth II, clashes while coming to terms with the monarchy’s role today. Tim Pigott-Smith as Charles, Oliver Chris as William, Richard Goulding as Harry, and Lydia Wilson as Kate reveal intricate inner lives we never get to see in such public figures.

Jack Smart
Jack Smart is the awards editor at Backstage, where he covers all things Emmy, SAG, Oscar, and Tony Awards. He also produces and hosts Backstage’s awards podcast “In the Envelope” and has interviewed some of the biggest stars of stage and screen.
END_OF_DOCUMENT_TOKEN_TO_BE_REPLACED