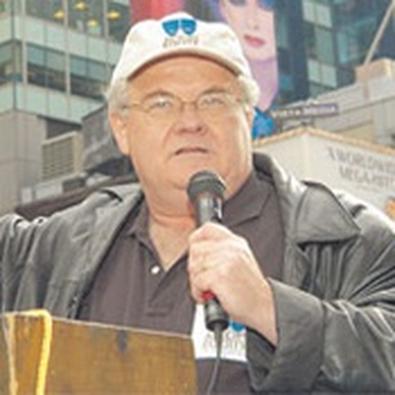 On a chilly Sunday last November, John Connolly stepped to a lectern at St. Malachy's Church in Manhattan to address a consortium of theatre unions on the second day of the stagehands strike. The executive director of Actors' Equity Association seemed to have several objectives that day: to show solidarity with striking members of Local One of the International Alliance of Theatrical Stage Employees; to brace Equity members for what would turn out to be a 19-day work stoppage, the longest on Broadway in more than 30 years; and to embolden a workforce feeling uncertain in the face of rapid changes throughout the entertainment industry.

The longtime labor leader and actor did not disappoint, delivering an eight-minute speech that evoked the unionist fervor of Samuel Gompers and the balled-fist dialogue of Clifford Odets. "I think it's remarkable that, here in the United States today, that what seems weird to some people is that working people will actually stand up and defend themselves," he said, his voice booming off the nave's plaster walls as the congregation of stagehands, performers, and musicians stood and cheered for more than 30 seconds. "There's an attempt to radically transform the nature of work in this country, from North to South, from East to West, across the media, across the theatre, in every industry. Workers are held in contempt, workers are regarded as expendable, and they should be grateful for whatever crumbs they get. And if your life is a life of part-time, temporary work, tough: Why weren't you born rich?"

From that speech, one might think Connolly is a labor firebrand ready to launch an offensive against management at a moment's notice, and there is something to that. As president of the American Federation of Television and Radio Artists from 2001 to 2007, he helped thwart an attempt by the Federal Communications Commission to relax rules concerning media consolidation. At the same time, however, he played a key role in establishing a flexible organizing and negotiating strategy that led to smoother relations with studios and networks -- a posture that also raised the ire of some in the Screen Actors Guild who felt AFTRA was poaching on SAG turf and was too conciliatory toward producers at the bargaining table.

Connolly starts his second year at Equity as the chief negotiator for a new Production Contract, which covers work on Broadway and national tours and is the union's most lucrative pact. Over the next several months, Equity members will get a clearer picture of what kind of leader he intends to be: the fiery orator who can inspire a crowd to stand in support of a strike, or the dealmaker who said recently, "I've had plenty of strike this year. I'm full up with strike.... Nobody's going to go on strike unless they [the producers] make it a war, and they shouldn't do that. We're thoughtful, professional, reasonable people."

While the SAG-AFTRA drama and the threat of an actors strike has garnered most of the attention of industry watchers in Hollywood, talks on the Production Contract quietly began April 18 in New York. Connolly and Equity president Mark Zimmerman, each of whom spoke extensively with Back Stage last month about the future of the union, are cautiously optimistic that a deal can be reached before the current one expires June 29.

Connolly and Zimmerman said the key issues will be worker safety and the Experimental Touring Program, a provision in the Production Contract that was the result of hard bargaining in 2004, the last time the deal was renegotiated. The program has a six-tiered salary system based on a tour's expected weekly grosses. Actors and stage managers can earn additional money and other compensation if the production is successful.

Though Connolly had nothing to do with its creation, the program was born of a similar flexibility and willingness to compromise, which are needed at a tumultuous time in the entertainment business, he said: "There's significant growth out there. And where there's growth, there's a challenge for unions. Jobs that are created don't automatically become union jobs. You got to go out and you got to convince the performersâ€Śthat it's in their interest to be part of the union, or you have to leverage the employers and make them agree to sign a contract. That doesn't happen because you say so."

Of particular concern to Equity is the huge growth in fine-arts schools on the undergraduate and graduate levels: There are more than 800 accredited programs in the United States, while 30 years ago there were fewer than 50, Equity spokeswoman Maria Somma said. Every year, as a result, there is a fresh supply of nonunion performers who can act, sing, and dance -- and who are hungry for work.

Tours are not the only area in which Equity would like to expand its jurisdiction. Theme parks, the gaming industry, and cruise ships, as well as theatre that caters primarily to African-American and Spanish-speaking audiences, are vast untapped markets. "The cruise business increased by a factor of 10 in the past 10 years," said Connolly. "I know designers who have been brought in to design theatres before the keel is laid on a new ship." Also, a study of Spanish-language theatre in Southern California has been authorized, Zimmerman said, and could be used as a model for a broader outreach effort.

On the whole, Connolly and Zimmerman said, they want to beef up Equity's organizing department, but not until they have conducted extensive research. "We want to reorganize ourselves to take advantage of the growth," said Connolly. He added, "We want to do this right. We want to do this based on facts, not bullshit and anecdote."

Taking a broad-based view seems to be at the core of Equity's current approach. In addition to organizing, Connolly said, the union will invest resources in public policy, addressing issues such as health care, housing, and taxes.

But the executive director's outlook has not always won him friends, particularly when he was at AFTRA. During his time as president, the federation greatly expanded its jurisdiction in basic cable, the cornerstone of a bitter dispute that has driven SAG and AFTRA apart, at least temporarily. Many in the guild's leadership believe basic cable is SAG's turf and, they contend, AFTRA organized it by undercutting guild rates.

Further, some SAG officials have maintained that under the stewardship of Connolly and others, AFTRA has become strike-averse, robbing performers of their most valuable weapon at the negotiating table. One SAG member, who requested anonymity, said Connolly initially granted strike authorization to the committee negotiating the Interactive Media Agreement in 2005, only to change his mind at the last minute (a move that was supported by SAG's then-president, Melissa Gilbert).

However, Connolly assumed the AFTRA presidency under difficult circumstances. He was elected in early August 2001, less than a year after the settlement of a six-month SAG-AFTRA strike against advertisers; in the middle of the dot-com bust; and about a month before the terrorist attacks of Sept. 11 -- all of which had a disproportionate impact on the New York economy and significantly reduced companies' advertising budgets.

In 2002, AFTRA's jurisdiction in network prime-time television consisted of a single show, according to Daily Variety. By July 2006, the federation had expanded its network prime-time coverage to 36 hours and had signed more than 300 basic-cable shows in the previous year alone, the report stated. (Not all were scripted programs; AFTRA also covers talk, game, and reality shows.)

In 2003, AFTRA was faced with a substantial deficit in its operating budget, ranging from $1 million to $2 million. Although AFTRA still runs a deficit, the situation is more stable now than it was in 2001, according to a source with direct knowledge of the federation's finances.

Asked if he would bring to Equity the more flexible strategy that he helped develop at AFTRA, Connolly indicated that his job was to execute what the Equity Council and the rank and file want. "It's not for me, nor do I believe in riding in on a white horse and imposing my perspective on an organization," he said.

Still, Equity's top executive hinted at the path he might take: "If your strategy is to organize the unorganized work, what are the right tools to get the job done? If you don't own the turf, you can never improve it."

Andrew Salomon can be reached at [email protected].