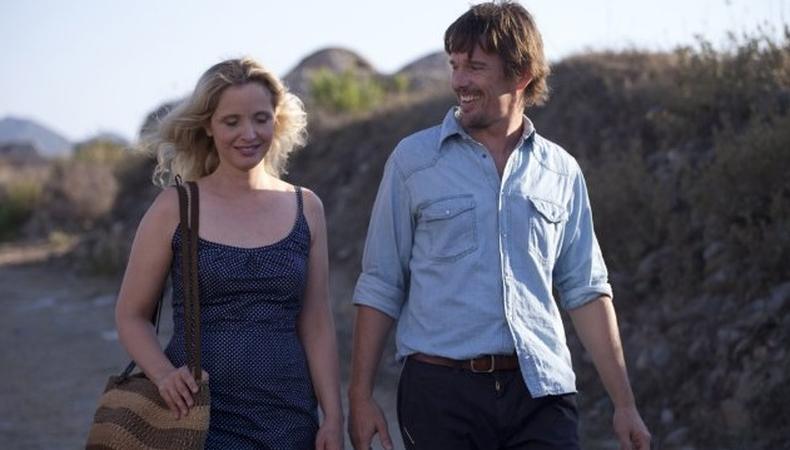 Twenty years ago, Ethan Hawke and Julie Delpy were auditioning for filmmaker Richard Linklater to be in “Before Sunset.” Little did they know then, the film would turn into a real time trilogy in which the French Céline (Delpy) and American Jesse (Hawke) meet on a train and begin an extended romance.

“You think you’re going to meet lots of writers who want to say help me make this,” says Hawke. “We wouldn’t be back here doing this if it wasn’t in fact extremely rare.”

The third film “Before Midnight” was released in June and received two Spirit Awards nominations for Best Screenplay (Delpy, Hawke, and Linklater) and Best Female Lead (Delpy). We sat down with the team to talk about their collaboration.

What was the audition process like with “Before Sunrise?”
Julie Delpy: Do you think you would have made the second and third movie with the other actors?

Richard Linklater: No, of course not. I think you were the second actress I met. Early on I didn’t know if it would be an international male and an American female. I was just looking for the two most interesting people, and it was easily flip-flop-able, believe it or not. I saw Ethan in a play, so we got to talking that night and then Ethan came in like a day or two later. You came in to Judy Henderson’s, and we just talked. I was like “This guy’s perfect.” I was looking for a verbal dexterity that not everybody has.

Linklater: I was looking for the two smartest, most creative young people I could find. Voila!!

Did you know you wanted actors who would collaborate as writers as well?
Linklater: Absolutely. I mean, there was a script. It was something I had done with “Slacker” and “Dazed and Confused,” my two previous films. Actors put out some material, we rewrite it, and it gets more funny and real. I want to do that but with just two people. I knew just structurally how much work—how intense that was going to be. I was just looking for the two artists who wanted to come onboard and really give themselves.

Ethan Hawke: And for us—what an unbelievable opportunity to have somebody ask you to do that. That was a dream come true.

Linklater: I remember Ethan was getting offered every project in the industry for a young man, and he was like, “Yeah, this is going to be hard to pull off. I might not do it.” Willingly coming to Vienna to make a film that he knew had a small bulls-eye that would be hard to pull off. I do have endless respect for that. To take that kind of risk at that point in your career for no money when you’re being offered big bucks for every movie. I took it for granted at the time in a way.

Hawke: But you have to when you’re a filmmaker, you think everybody should work with you.

Linklater: Seeing Julie and Ethan at that final callback. They just looked perfect. I had the first front row seat. It was like Oh! You kind of fucked with each other a little bit.

Linklater: Little bit. There was a fun little repartee there. You were talking about some guy, and Ethan was like, “Oh, did you sleep with him?” And then you threw something back at him. I’m dealing with two heavyweights. We see the full maturation of that in the hotel room scene [in “Before Midnight.”]

Yeah, I wanted to talk about that. Both “Before Sunrise” and “Before Sunset” are very romantic films and the audience is just waiting for these characters to get together. They’re finally together in “Before Midnight,” and they’re fighting. It’s not a story we see often onscreen. Why was it important to you to tell this part of the story?
Delpy: Well, it’s the hardest one to get to. At the end of the second film, you’re rooting for them to end up together, but that has consequences obviously, and the consequences have consequences—him having to be away from his son and splitting up from his wife. That has consequences on this new relationship, which is a lot of build up of stuff. Going there is hard because it’s emotionally draining. To me, it couldn’t be less autobiographical than Céline. I’ve never dealt with what it’s like to be with a man who’s separated. But I can create this character and create this dynamic and situation, but it’s still very hard to go there emotionally as an actress and as a writer. It’s hard to watch the film at times, but we did it with humor also.

Richard, you mentioned a little about how they improvised in the final callback. When you’re writing together is there any level of improv that happens?
Linklater: Never in character.

Delpy: It’s not improvised at all, and it seems very natural.

Delpy: Each time we rehearse, we listen to the dialogue. We’re like, “That’s sounds written. Let’s work on it again.” The first work is to work on the dialogue to make it sound completely spoken and not written at all, and then the second layer is when we shoot to make it seem natural. It’s funny because someone just called me and asked me to write something for them to sound as natural as this, and I’m like, you have to be careful because a lot of the natural sense is in the acting, not necessarily in the writing.

Delpy: If you act too acted, this dialogue might not necessarily work. So you have to be careful because I can deliver something that is written in that genre, but it’s half the work. And some people assume it’s improvised. It’s very written.

Linklater: We’re trying to create an impression in the viewer’s mind that you’ve been dropped in to their reality.

What sort of research or character backstory writing do you do for what happens between the films?
Linklater: You want to sprinkle in the last nine years throughout the movie.

It’s not something where you have a shared document where you keep track what happens between the films?
Linklater: No. We don’t think about these films for five years. We’re in radio silence land right now on the next one.

How do bring your own personal experiences to the film?
Delpy: Well, we’re not that different in our functioning.

Linklater: Jesse and Céline are pretty ordinary. They’re not out of the statistical norms of most people their age.

Delpy: I have so many girlfriends who have a very different life from me, and they see the film and they’re like, “Oh my god, it’s like my life.”

Hawke: People say, “Did you put a tape recorder in my house?”

Linklater: You just witness the world.

Delpy: Things you’ve thought of saying in a relationship that you didn’t say in a fight. Things you wish you had said, like that line about the little fairies. I’ve always wanted to say that.

What’s the line?
Hawke: Men believe in little fairies that sunscreen the kids, do the dishes…

Linklater: Make the fucking Greek salad that you eat like a pig.

Delpy: I’ve always dreamt of saying that line, and in a way, I put it in a film so I said it to Jesse.

Delpy: But in my real life, I never said that because I never felt the right time to say it, but in a movie, you can look for things, make up things you would like to say, and also be inspired by other people. I’ve been a witness of a couple that have been together for 35 years, as a child, my parents. I have lots of examples of what people go through. It’s interesting because you can draw from everything.

Linklater: We’re lucky on these films because the construction of it is going for a certain kind of honesty. So many romantic films—they’re kind of built on an artifice that we have tried never to really abide by too much. We have some mythic audience in our mind that would appreciate the unvarnished honesty of the darker moments of a relationship. I’d say we can do things that another kind of film couldn’t support. We’ve constructed our support all kinds of ugly and dissonant things that would fracture like any other kind of romantic film because our foundation’s just different. That’s great for us. We don’t have to spend a lot of time thinking about, “Oh our audience won’t like Céline if she says this or our audience won’t like Jesse.” We’ll lose ‘em! We’ll lose our audience if we do this or that.

Delpy: On a regular film, I would have said, “Why does she keep on going to fight? Why does she do this?” When people do things not necessarily because of a logical background functioning. People do shit all the time that’s not explainable. If you’re obsessed with your child getting hurt, is it because you lost a child when you were younger? No! It’s just because some people are obsessed with their child getting hurt. And people have to put these explanations. It’s heavy. It’s like a big cake with too much fucking cream. It makes me sick. So many movies, I’m like why did you have to add the fucking background story of the cop being fucked up because he was ass-raped or shit like that? Why do you have to have all that background story?

Hawke: You see the screenwriter working.

Linklater: There is a kind of movie that that works for. We’re not interested in that.

The type of relationship that Céline and Jesse have is very rare today, with so much social media and texting. And there’s that young couple in the dinner scene who mirror Jesse and Céline, except they have Facebook.
Linklater: You can have long distance relationships now. I remember when I went off to college, all the guys who had girlfriends back home, they didn’t make it through college. There’s just so much distraction. But I think it’s different now. You can text. Phone calls were so expensive.

Hawke: You’re so real to each other because you’re texting, you’re sending videos. You’re constantly in touch.

Linklater: It’s the end of an era.

So will we see Jesse and Céline again in nine years?
Delpy: We don’t know yet? They might not be alive.

Linklater: We’re enjoying the not rushing in part. It’s kind of an intense thing when we do these.

Hawke: Maybe we do another one in 20 years or something.