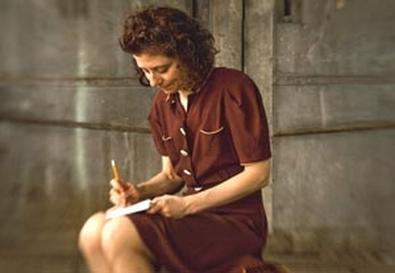 Photo Source: Copyright RicardoBarros.com 2009
There's nothing wrong with dramatizing untold or underexplored Holocaust stories, provided they deliver as much of a theatrical punch as the topic obviously deserves and requires. The problem with "Etty"—the title is the nickname for Esther Hillesum, viewed by scholars as the adult counterpart to Anne Frank, with a sadly similar ending—is when the frame for that exploration falls flat.

Hillesum was a philosopher, a poet, a believer in mysticism, a spectacularly accomplished student, a fervent adherent of left-wing politics between the world wars, a passionate lover of various men, and, at the behest of a man who was a "psycho-chirologist," a devoted diarist. Had Hilleseum not possessed strong literary aspirations, an intense prose style, and kept a diary during the early years of Germany's occupation of her native Holland, we wouldn't know of her today. Her multiple dimensions and agonized chronicling of her time offer a priceless window into the same world in which Anne Frank famously and tragically hid.

Despite direction by Austin Pendleton, however, none of Etty's various attributes are necessarily translated into solid action. Certainly there are scenes that sear, such as her vivid descriptions of working on behalf of the Jewish Council for Amsterdam, which helped to administer the deportation of Jews. But even these scenes are merely described by diary entries told through direct address; there is only so much one can hear of these things before sentences and situations begin to blur and bend. At the same time, great swaths of the play consist of diary entries that are more personal—the men Hillesum loved, the books she read—than inexorably profound.

Seemingly trapped on a bare stage but for a chair, a suitcase, and a glass of water, Stein eerily resembles Hillesum. Still, she cannot modulate her voice enough to transform the piece from a recitation of entries to the unveiling of a creative life cut cruelly short.

A final note: The tightness of the uncredited lighting plot forces Stein to perform too close to the three rows of audience seats. The inability to see the actor in full, to gain even a slight bit of distance on Etty as a character, turns "Etty" into more of a radio play than anyone may have intended.