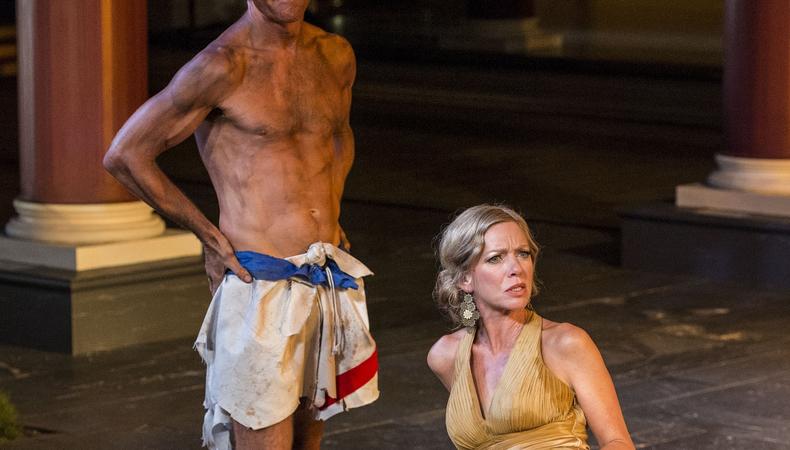 Those Greeks are so very dramatic. Well, duh! They’re Greeks, after all. What, you expected the garment-rending, gods-cursing populace of a Euripides play to go in for subtlety?

Ain’t happening, and certainly not in “Euripides’ Helen,” the playwright’s lesser-known drama about Trojan women. As conceived by adapter Nick Salamone and director Jon Lawrence Rivera, this new version has the woman whose face launched all those ships as a 30-something diva living semi-cloistered on an island. Nobody even knows she’s there. The gods, you see, have inserted a decoy into the Trojan War. The real Helen never betrayed her husband, King Menelaos ofSparta, never even gave hot youngParisthe time of day.

Unfortunately for her, in theHollywoodoverlay that Salamone has draped on “Helen,” the title character is a movie star with a chorus of equally stargazing lady attendants. Even worse, imprisoned as she is out on the island of Pharos, Helen’s got no audience, unless you count the place’s lusty ruler, Theoclymenus, who is looking to wed and bed her, not necessarily in that order.

Rachel Sorsa, a veteran of the plays of Del Shores, wears her slinky pearl cocktail dress like a second skin and summons tears to her anguished blue eyes with real star quality. Her Helen is, make no mistake, a genuine “It girl,” if now a bit aged, and Sorsa’s performance evokes a woman looking to recapture her magic while also clinging to more-worthwhile priorities: I did love my husband. I do hate the fact that 10,000 soldiers died because of me. Rivera’s production swerves—not always smoothly—between consequences-of-war pathos and high comedy, usually defaulting to the latter.

Helen gets to up her comic and tragic games when unexpected visitors start turning up on Pharos. First it’s Teucer (Christopher Rivas), the wheelchair-bound younger brother ofAjax, hugely bitter at her. He’s followed by Menelaos, Helen’s only love, assumed dead. But of course we knew he wasn’t.

Menelaos is played with a cockney accent by a quite droll Maxwell Caulfield, who spends most of his time onstage begrimed and clad only in a tattered Spartan Navy flag (there are cheeky costumes all around by Mylette Nora). The butt of many a foul-odor joke, Caulfield makes for a great underdog and partners expertly with Sorsa. Whether in waltz mode to the adapted songs by Salamone and composer David O or batting witty quips around, Caulfield and Sorsa are a splendid dramatic duo.

They don’t have to carry the weight alone. Carlease Burke positively slays as Helen’s appropriately named slave Hattie. It’s Burke who gets to deliver the wrap-up, a blend of stereotyped slave speech containing references to Aphrodite and Hera. You get the idea that if liberated even Hattie might pursue some cinematic dreams. With these Greeks, clearly celluloid is in the blood.