Everything's Up to Date in Kansas City 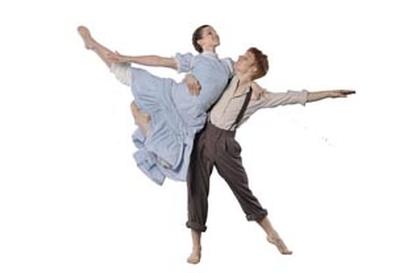 Photo Source: Kenny Johnson
The development of new arts projects nationwide is being severely curtailed due to the ongoing economic crisis. In Kansas, for example, state arts funding has been completely eliminated. But next door, in Kansas City, Mo., it's quite the opposite. There, Kansas City Ballet is settling into brand-new quarters, the Todd Bolender Center for Dance & Creativity, and preparing a significant, newly commissioned work, "Tom Sawyer: A Ballet in 3 Acts," which will premiere Oct. 14 at the city's spanking-new Kauffman Center for the Performing Arts, a state-of-the-art facility that opened Sept. 16.

On a recent visit to Kansas City, I was given a private tour of the Kauffman Center, sat in on "Tom Sawyer" rehearsals, and attended the Bolender Center's grand-opening celebration.

The company believes "Tom Sawyer" to be the first evening-length ballet based on an American literary classic and composed, choreographed, and designed by an American creative team. The music is by the Tony Award–winning Maury Yeston ("Nine," "Titanic," "Grand Hotel," "Death Takes a Holiday"), with costumes by Holly Hynes (the Kennedy Center's resident costume designer and the former director of costumes at New York City Ballet), sets by Walt Spangler, and lighting by Kirk Bookman.

"When I looked around at the new full-length story ballets that have been created recently—such as 'Peter Pan' and all the various productions of 'Dracula'—I wondered where the American authors were," says William Whitener, Kansas City Ballet's artistic director and the choreographer of "Tom Sawyer." While a ballet based on the famous Mark Twain character and his adventures growing up in Missouri is sure to resonate with Kansas City audiences, it's also a perfect fit for the company's dancers. The leading roles of Tom and Becky are superlative showcases for two of the troupe's newest dancers—Princess Grace Award winner Alexander Peters and Alabama native Laura Wolfe—both of whom are New York–trained and technically outstanding, yet small in stature and extremely young-looking.

In addition, the ballet offers the dancers considerable opportunities for artistic growth, which has always been one of Whitener's primary missions. "Most dancers right out of school haven't been in narrative ballets," he says. The development of a character and the expression of the character's journey through a full-length story ballet require a specific kind of stamina, acting ability, and mastery of a variety of movement modes.

Watching Whitener coach the dancers on the subtleties of communicating puppy love, reacting to the discovery of a dead body, and executing a classical arabesque while conveying the gawkiness of youth, it becomes clear how fortunate the troupe is to have a helmsman with such a rich background in theatrical dance. Aside from dancing with the Joffrey Ballet, Whitener performed in the original cast of Bob Fosse's Broadway revue "Dancin'," was a principal with the Twyla Tharp Dance Company, and assisted Jerome Robbins on the choreographic reconstructions for "Jerome Robbins' Broadway."

Room to Spread Out

The company is also privileged to be rehearsing in its new home, which is named for the late Todd Bolender, a former principal dancer with New York City Ballet who served as Kansas City Ballet's artistic director from 1981 to 1995. The Bolender Center is located in what had been the power house for the city's railroad depot, Union Station, site of the infamous 1933 Kansas City massacre. After a two-year, $32 million restoration, the abandoned building is now a bright and spacious seven-studio facility. And the timing couldn't have been better: One of the key set pieces for "Tom Sawyer" is a big raft that wouldn't have fit into any of the company's previous rehearsal spaces.

Not only is the Bolender Center making it possible for Whitener to create ballets on a larger scale, but it's also opening doors to new choreographic possibilities. "We can now do crossovers," he says. In the company's previous theater, dancers couldn't exit on one side of the stage and enter on the other without going underneath the stage floor. "We had a dancer get injured one night doing that, so we stopped it," he explains.

As one of the Kauffman Center's three resident companies (along with the Kansas City Symphony and the Lyric Opera of Kansas City), the troupe will debut "Tom Sawyer" in the sumptuous venue's 1,800-seat Muriel Kauffman Theatre, intended to host dance, theater, and opera. Designed by architect Moshe Safdie, the center also includes a concert space, the 1,600-seat Helzberg Hall, so it will be possible to have two productions going on simultaneously.

While the awe-inspiring lobby is stark—with its humongous panes of clear glass—the theaters are rich in color: one in hot shades of red, the other in cool blues. The luxurious backstage facilities offer every accommodation a performer could want, from a physical therapy room to hallways wide enough to saunter down in wide-skirted period dresses. All of the walls in the confusing maze of backstage hallways, however, are painted either red or blue, corresponding to the color of the theater above. I guess this was the savvy architect's way of ensuring that Tom and Becky don't accidentally charge onstage for their pas de deux and find themselves in the third movement of Beethoven's Fifth.