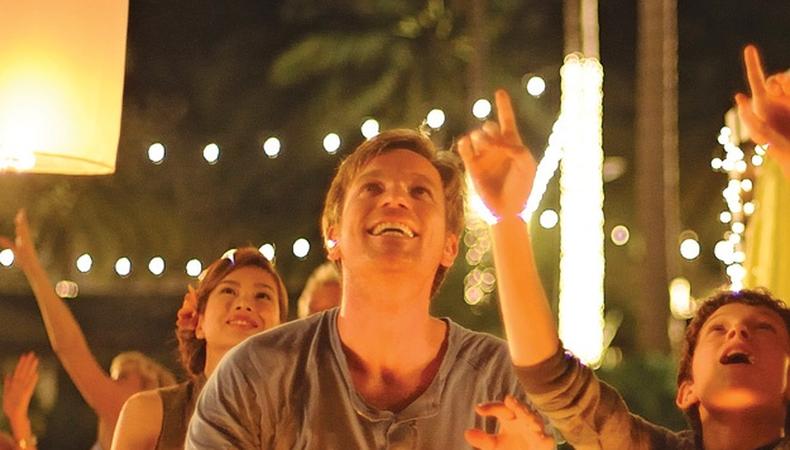 Ewan McGregor has won acclaim playing everything from a junkie to a Jedi, but there’s one role he’s never really tackled on film: a father. “I really don’t think I’ve played a father—or if I’ve been a dad in something, the piece wasn’t about being a parent,” says the real-life proud parent of three. “So this film really spoke to me about what that means, that very strong, unique love we have for our wife and kids and only for them.”

The film in question is Juan Antonio Bayona’s “The Impossible,” in which McGregor and Naomi Watts play a couple on vacation in Thailand with their three sons when a tsunami hits. Based on actual events that occurred in 2004, the film is gut-wrenching and inspiring in equal measure. McGregor wasn’t aware when he first read the script that it was inspired by actual events. “But I guess I wasn’t surprised because the writing was so powerful in a sort of underwritten way,” he says, pointing to a particular line where the oldest son sees a severe wound in his mother’s leg and says, “Oh, Mom, I can’t see you like this.” Says McGregor, “As I read that line, it sort of stopped me in my tracks—that’s a very powerful piece of writing. And then I learned it felt that way because it was written absolutely from that family’s experience; the lines of dialogue are, in fact, things that they said.”

McGregor had to work closely with Samuel Joslin and Oaklee Pendergast, who play his young sons, and the actor was amazed by the professionalism displayed by the actors. In fact, another line McGregor cites is when he tells Joslin’s character to look after his brother and he responds, “But Dad, I’ve never looked after anybody before.” Says

McGregor, “He improvised that line—it was all him. And it was amazing.” McGregor notes that though the boys were always aware they were pretending, he sometimes had to cajole them into playing scared. “I was worried that after four months of saying, ‘Come on, remember, we’re really sad here,’ they would dread seeing me. Like, ‘Oh God, here’s Ewan come to bring us down again.’ But what was wonderful was as soon as they shouted ‘Cut,’ they were off playing football or in the pool, being happy little boys.”

McGregor was shooting “Salmon Fishing in the Yemen” and unable to meet his real-life counterpart before shooting started but did make his acquaintance on set. And before the film’s premiere at the Toronto International Film Festival, the family was treated to a private screening. “I think the film ended and they stayed in there for 20 minutes or half an hour, crying and talking to each other,” says McGregor. “And then eventually came out and were very, very happy with what we had made.”