The Exhilarating Shoot for 'American Hustle' 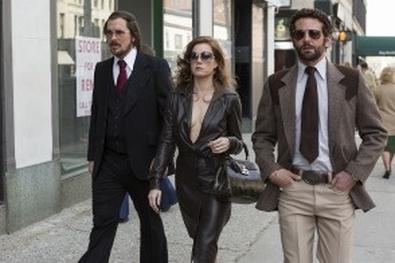 A David O. Russell film set can cause an actor to freeze or to blossom. For the latter, Russell’s free-wheeling, try-it-all-and-keep-the-cameras-rolling style can be addictive—which might be why his “American Hustle” features so many returning faces. The core quartet—Christian Bale, Amy Adams, Bradley Cooper, and Jennifer Lawrence—all received Oscar nominations for their previous work with Russell; Bale and Lawrence won for “The Fighter” and “Silver Linings Playbook,” respectively. And now awards season buzz (and a SAG Award nomination for outstanding performance by a cast in a motion picture) has followed them all to “American Hustle,” an imaginative retelling of the Abscam controversy starring Bale and Adams as con artist couple Irving and Sydney, and Cooper as FBI agent Richie DiMaso.

The seeds of the film were planted during last year’s awards season, as it happens, with Russell and Cooper using their time together at banquets and awards ceremonies as de facto script conferences. “Any downtime was spent mining over aspects of ‘American Hustle,’” says Cooper. “So it wound up being a wonderful release.”

For her part, Adams never saw a finished script until a week before filming began. “There’s a lot of trust involved when you’re working with David,” she says. “But the bones of the character were as he had laid out. She’s a very complex human being!”

Part of that complexity happened at the last minute. In the film, Adams’ character, Sydney, leaves her job at Cosmo Magazine to join grifter forces with her lover Irving—but she also leaves behind a past as an exotic dancer. “David adds stuff on the fly, so there was always a moment when you feel unprepared,” Adams says. “That my character used to be an exotic dancer was added the night before we filmed that scene. I said, ‘OK, let’s shoot it but I have to see it first!’ I didn’t have a lot of time to deliberate.”

Russell keeps up that frantic pace throughout filming, often asking his actors to do a total 180 in their performance as the cameras roll, which Adams calls, “very exciting. You get to discover the scene in a thousand different ways.”

Cooper agrees. “There’s many ways to skin a cat, and David wants to get it every which way he can,” he says. “That’s very freeing as an actor, and it’s wonderful for the character because you get to live in the shoes of the character in many different ways. But the main thing is it forced you to let go of your ego or your censor. It’s going to get scary, and you’re going to want to stop, and you’ll be embarrassed—but you’re going to go because David will protect you.”