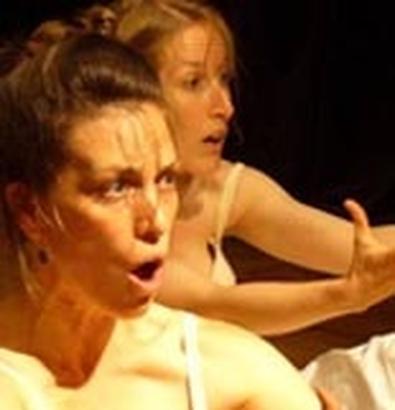 I saw an amazing performance last month by a recently formed New York-based troupe called the Experience Vocal Dance Company. The show involved a small group of women acting and singing operatic arias while fully engaged in executing modern-dance choreography. The performers managed to sing magnificently while doing such things as balancing on one leg in arabesque or sitting on the floor in an abdominal-taxing V-seat position. One woman sang an entire selection lying on her back with a sheet fully covering her body and face. It seems that these women were able to perform such an astounding blend of vocal and dance feats because they have been training in a newly minted performance methodology known as Integrative Performance Practice. When I expressed interest in the work, the inventor of the practice, Experience Bryon, graciously telephoned me from London, where she's currently teaching at the Central School of Speech and Drama, and talked at length about how and why she developed IPP. (And in case you're wondering, yes, Experience is her real name; she was named after her Puritan great-great-great-great-great-great-great-grandmother, Experience Robinson, and is a direct descendant of the Mayflower's John Alden and Priscilla Mullins.)

Born in Australia of American parents, Bryon attended New York's LaGuardia High School of Music & Art and Performing Arts as an acting major and has also undergone extensive training in voice and dance. After studying music in college in New Zealand, she earned a Ph.D. from a university in Melbourne, Australia, which offered her a full scholarship to work on developing her innovative IPP. "At that time, it was just a theory," she says. "It wasn't a technique yet."

Raised primarily by her grandfather, Alec Rubin, founder of Theatre Within (formerly Theatre of Encounter) and a pioneer in primal therapy, Bryon was immersed from a young age in a very internally focused approach to acting and performance training. "But I went in a completely different direction with my work. I made it all very physical," she explains. "I guess I did that thing where you grow up and go in the opposite direction from what you've been taught. But my grandfather did teach me about authenticity. I was an apprentice of his for many years, and although I'm passionate about not going into the area of art as therapy, I also became a yoga teacher, and I do appreciate that we need to witness all the directions of human consciousness and stay in the presence of the potential ability of our instrument. And that's where my technique really resides."

Bryon's technique is based on the full integration of singing, dancing, and acting, which she believes is a truly natural approach. "If I ask a child to sing," she says, "she will dance and act. If I ask a child to act, she will sing and dance. And if I ask a child to dance, she will act and sing. The disintegration of singing, dancing, and acting occurred somewhere during the development of Western society, around the time when we were devising the idea of disciplines. In the traditional Eastern forms of performance, like Chinese opera, that kind of disintegration doesn't exist. The fact that most of the world now practices the disintegration of the performing arts disciplines really disturbs me. Colleges have separate music departments, dance departments, and drama departments. We seem to think that we must disintegrate the teaching of the disciplines, and then eventually performers will somehow integrate everything within themselves."

Two years ago, to begin implementing her practice, Bryon assembled a diverse group of performers, which eventually became the Experience Vocal Dance Company. "Some were opera singers, some were puppeteers, one was a ballet dancer, and one came from an alternative rock band," Bryon recalls. "And the ones who had the most formal training, say in opera or dance, were the most difficult ones to teach. They had to unlearn so much in order to understand how to do just one thing. The IPP technique is not about layering singing, dancing, and acting. It's about doing something else altogether."

In describing the mechanics of IPP, Bryon says, "It's a breath dance — it all comes from breath, which we use in a very deep way. We establish our center very low in the body, lower than you would in [Martha] Graham or [Erik] Hawkins technique, down in the perineum. That's the place that stimulates both the sensory-motor and the automatic nervous system. It's quite an emotional place and, of course, the lower you go in your body, the more harmonics you get in your voice. We also work on very exacting isolation of the iliopsoas muscle. Ultimately, however, the technique is simply a way of training your instrument so that its full potential becomes available. IPP is not a performance style. It's a practice that can be applied to any genre or aesthetic. It's for anyone who has any kind of movement modality in their performance language and has the interest to voice and wants to create innovative theatre."

For those interested in studying IPP, Bryon will be conducting workshops in New York in February. For further details, visit www.experiencevocaldance.org.

Reach the author at [email protected].