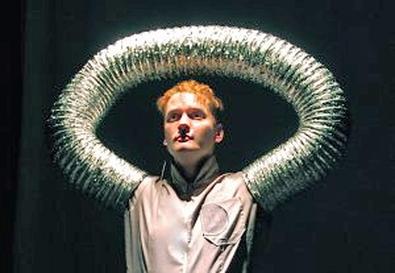 It's a future without music, where the motto is "Timeliness plus efficiency equals productivity." Foster (Sam Littlefield) makes shoes on an assembly line at a government-run factory known as R.U.1.B.F. In a place where everyone greets one another with "Good workday," his life is decidedly bland and completely colorless. "Everything is in working order" until one day, while brushing his teeth, the cadenced patterns of the brush against his molars gives Foster a bit of a psychological woodie.

There's nothing new in this bleak vision that hasn't been more innovatively predicted by Karel Capek in his 1921 play "R.U.R.," Orwell in "1984," or especially Frank Zappa when he stuck Joe in his garage observed by the Central Scrutinizer in 1979. But developed by Seattle-based performance art musical ensemble Collaborator, this apart production is set apart from the others by its score—created by Gabriel Baron, Carrie Nutt, and Michael McQuilken.

Here, saxophonist Steve Horist, music director Mark Sparling, and his assistant, pianist Miho Kajiwara, sit on a side stage, establishing the brave new harmonically infused world as Foster and his co-worker Arial (Alexandra Fulton) discover the soul-affirming rhythms in hibernation around them. This trio of highly skilled musicians doubles as foley artists to generate the music of everyday sounds such as birds chirping, rocks skipping over a pond, a straw sliding against a cup, and particularly in the machinery the characters use to create their shoes.

Director Kelleia Sheerin cleverly adjusts to the nightclub venue, offering a rockin' rock reinvention of the overworked theme. Any familiarity is made forgivable by adding the talents of McQuilken and his cohorts, whimsically futuristic set pieces by Squared Design, and sincere—if uneven—performances. Littlefield and Fulton are charming together as the stunned but delighted discoverers, and David Forseth and Brendan Wayne provide the evening's best performances as Foster's shocked co-workers, but someone should tell Shannon Zeller as the plant's overseer that no shouted projection is needed in a small club with a microphone strapped directly to her cheek. The amplified distortion she creates, along with her indistinguishable Eastern Block accent, could make one begin to wonder if a quieter future world wouldn't be so bad after all.