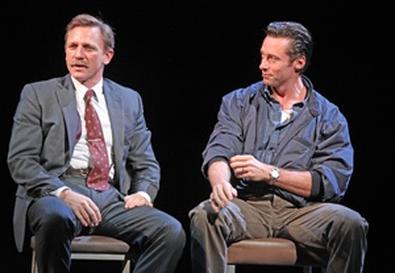 Jess Platt refers to them as "da boys." He's speaking about Hugh Jackman and Daniel Craig, who raked in mucho money on Broadway earlier this season in a limited run of "A Steady Rain," for which the Brooklyn-born, Los Angeles–based Platt served as dialect coach. Having worked with Jackman on several movies, Platt was requested by the sometime Wolverine to help him and the sometime James Bond master Chicago accents for the Second City cops they played in Keith Huff's drama.

So here was Platt—who admits, "I'm not cheap"—assigned to make an Englishman and an Australian sound like geographically specific Middle Americans. And note that his technique is applicable to any situation in which an actor from one place must acquire the sounds of a distinctive other place. As Platt says, "There is no such thing as not having an accent. Everybody has an accent."

Platt, a compact, affable man with unabashed remnants of his native Brooklyn accent, makes the comment during an interview in the midtown Manhattan hotel room he's occupying while spending a few November days with "da boys" for brush-up work. Addressing that task as representative of usual practices, he says, "The good thing is both Daniel and Hugh speak English as a first language."

What he's introducing by the remark is his core tenet: phonemes. Phonemes are the basic sounds of a language. According to Platt, English has approximately 46. "You learn the sounds of your language," he says. For illustration, he invokes the words "pet" and "peat," or "Pete." He draws attention to the short and long "e" and says that while English speakers hear the difference, people who, for instance, speak Spanish don't—or don't easily—because the short "e" sound isn't one of the Spanish phonemes.

"That's why," he notes, "you hear 'seester' for 'sister.' " That's why he once told Salma Hayek that he could never help her to sound authentically North American. He contended that she could master the phonemes to some extent but would inevitably lapse from time to time.

Returning to longtime friend Jackman and new friend Craig, Platt talks about a Chicago trouble spot: the especially hard "r," as in the word "hard." "Daniel says 'hod'—no 'r,' " Platt explains, "and Hugh says 'haard.' " Indeed, Platt goes on to report, the Chicago pronunciation of "hard" can be so, er, hard that "once Hugh and Daniel got the sound right, I asked them to pull it back." (Columnist's note: Getting the spelled versions to be exact correlatives of the sounds Platt makes is its own accent-in-print challenge.)

Estimating that he has worked on 40 movies by now, Platt says he gets along just fine with directors on set, because he knows he "shouldn't be doing any teaching. I do tweaking." When he begins work, he reads the script and figures out what the phonemes needed are; then he compares those with what the actor is familiar with. Once aware of where he has to bring the actor, he makes up exercises that include the trouble sounds. For "A Steady Rain," he constructed the sentence "The foreign man in the black shirt caught the hard round ball before he saw the first star in the dark night sky appear."

For a few instances of working relationships, he brings up Mike Myers and "54," in which the actor had to portray Studio 54 co-owner Steve Rubell. Myers insisted on sounding precisely like Rubell, who, Platt says, speaks in an "idiolect," meaning he has an individual sound that doesn't fit a generic dialect. For Scarlett Johannson, who needed to acquire an English accent for "The Prestige," he instructed her to aspirate the letter "t"—breathing slightly after saying the letter.

He could go on for hours and refers to helping Frances Fisher get a cockney accent as accurate as possible, while counting on the fact that "you don't have a lot of cockneys listening to it." On the other hand, he'll say his ultimate goal is: "I want a cockney, if a cockney is in the audience, to say, 'That sounds great!' "

Platt is so tied to movies that "A Steady Rain" is his first and so far only Broadway gig. Asked which is easier to navigate, he speedily answers, "Movies. You have all the takes. Not the same with stage performances, where it's so much harder. After a performance, I can go back and give notes. I can do nothing during a performance."

Platt got where he is by one of those unexpected breaks that often determine careers. From childhood he was interested in speech, and so he trained as a clinical speech pathologist. Once he had his Brooklyn College degrees—a B.A. in speech and an M.S. in speech pathology—under his belt, he migrated to California, where he worked correcting children's impediments—lisps and the like.

In Tinseltown and environs (Platt now calls Belmont Shores, Calif., home), where so many denizens are in the movie industry, the speech therapist lived next door to someone who knew someone connected with the late "Dynasty" television series. It so happened that the producers were looking for someone to work with Emma Samms, the English actor then replacing Pamela Sue Martin. The good neighbor suggested Platt, who was contacted. He said yes because "it was right up my alley." The rest is Platt's curriculum vitae history. Or, as he puts it, comparing his prior practice and his continuing flix shtix, "I'd rather do this."