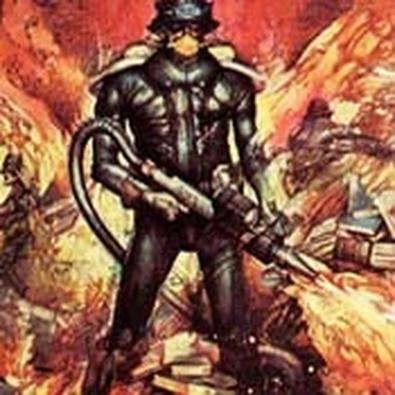 A fiery blast from the past, Ray Bradbury's Fahrenheit 451 just doesn't seem to want to go away, even 55 years after it was originally published. And that's a good thing. The latest stage incarnation of Bradbury's sci-fi literati treat is a kindhearted return to stylish material that's most definitely still got something to say.

Remember when firemen used to put out fires? It's a distant memory in the slick urban world plastered with TV screens where fireman Montag (David Polcyn) comes home each night, smelling of kerosene after a hard day spent burning books. But here the goal is not so much censoring certain ideas as destroying all ideas. There's nothing worth knowing in a tidy, pharmaceutically dulled society where independent reason only gets in the way, where conversation only keeps people apart. "Let me think for you," says Captain Beatty (a captivating Michael Prichard), Montag's ruthless leader. We can guess what's coming, even if we've forgotten the book. And of course we love it.

Director Alan Neal Hubbs and company obviously love it as well. Playing on a wonderfully retro-futuristic set by John Edw. Blankenchip with fantastic costumes (Susanne Klein) and super tech (sound by Robert Arturo Ramirez, lighting by Peter Strauss), the cast seems to relish this stuff, even when it gets a bit overindulgent. Jessica D. Stone as the girl who asks why, Stephen Robert Wollenberg as her grandfather, and Tanya Mounsey as Montag's glazed wife are particularly enjoyable.

Although the show's pace is somewhat hampered by uneven performances -- as the conflicted Montag, Polcyn has a hard time sustaining Fahrenheit 451's heat -- Hubbs' clever staging and focus never overshadows Bradbury's substance, and in this production Prichard's Captain Beatty has what it takes to make it all resonate.