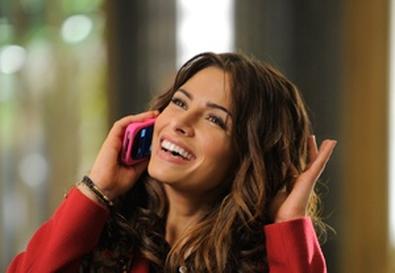 Photo Source: Alan Zenuk/USA
On television, Sarah Shahi lays down the law as feisty legal mediator Kate Reed on the USA Network's "Fairly Legal." But her path to the courtroom is a fascinating one—as a Dallas Cowboys cheerleader, she met director Robert Altman when he came to town to shoot "Dr. T and the Women." The famous filmmaker encouraged her to move to L.A. to pursue acting, going so far as to give Shahi his cell phone number. Assignments on series like "Alias" and "Life" followed before she landed the role of Kate, despite the fact that in the midst of her audition the recent mother began lactating and left the room with a soaked shirt. Shahi credits her success to a number of factors—determination, a positive attitude—but the man she calls her "best-kept secret" is her acting coach, Bill Howey. And he's not just her teacher, he's her father-in-law.

Shahi met her husband Steve Howey in 2003, when she guested on an episode of "Reba," where he played Reba McEntire's son-in-law. Steve had studied with his father, and suggested Shahi do the same. The elder Howey started out as an actor doing repertory theater in Cleveland, OH, but says he "walked in the back door to teaching." He notes, "Someone offered me a teaching job and I really took to it. I didn't set out to do it, but here I am." He has now been coaching actors for nearly 35 years and authored the book "The Actor's Menu."

Shahi admits she was initially hesitant. "I just thought it was a bad idea," she says. "We were too close." But she was eventually convinced to see Howey when preparing for her audition for "Life," she took to him immediately. "I walked in and the first thing he said to me was, 'What are you trying to do?' He was the only coach that really pushed me to make it personal and got me to understand how it was to build a character and understand why they behave the way they behave. So it was less about me pretending to be someone else, but using parts of myself to bring a character out.

From his perspective, Howey says Shahi was an ideal student. "From the beginning, she's been interested in exploring and not afraid to discover herself and her craft," he notes. "I've always said she's arguably the hardest working woman in show business. I have to stay on my toes just to stay ahead of her." He also praises her ability to make new choices. "I remember one time she came in with a very set idea of what she wanted to it, she had this whole thing planned out," he reveals. "I asked her to try a few things and by the end, she changed everything—even her hairstyle, how she dressed. She was willing to think of things in a whole new way." Concurs Shahi, "It's all about keeping it fresh and unexpected. He has deepened my acting so much. My joys are that much more joyful, my anger is that much more angry. He has helped me react so much more intensely to all my emotions."

Howey is also somewhat responsible for the other event that Shahi says deepened her acting—the birth of her son in 2009. "I now know what love is," Shahi enthuses. "It's like my heart is filled. All those emotions—love, fear, anger, frustration; all that stuff is accessible and right there. Your heart just becomes that much deeper and fuller."

Shahi credits Howey with every role she's booked since they began working together, including "Fairly Legal" and the upcoming Sylvester Stallone movie "Bullet to the Head," which just wrapped. "I play a gritty, grimy Louisiana tattoo artist and I couldn't have gotten it without Bill," she says. And is Howey surprised at all by Shahi's success? "No," he says, without hesitation. "First of all, she loves it. It's tough, but it's a real joy for her. Secondly, she works so hard and is so open to constantly improving. From a coach's point of view, I would love to say that all her success is because of me. But it's not. But I can say this: I didn't get in her way!"