The Farce Be With Him 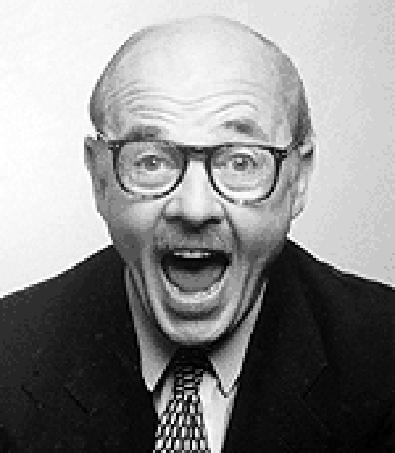 Farce has variously been defined as a low style of comedy, abounding with ludicrous incidents and gross expressions; as a comic form developed on plot contrivances and horseplay; as a theatrical piece in which the characters and events are greatly exaggerated to produce broad humor; as humorous drama that draws amusement from the ingenious manipulation of intricate situations in which stereotypes are involved; and as a scenario involving saucy vicars and mislaid underwear.

Within the category of farce can be listed the British kind, discussed here; French bedroom farce, a different kettle of bouillon, relying more on revolving bedroom doors than on nonstop action; and what we call comedy, a semi-improvisational, comic-book form that has neither the structural elegance nor the discipline of those earlier entertainments and that is quietly being transferred to television.

Ray Cooney is the undisputed master of British farce, and his Caught in the Net is currently running at Long Beach's International City Theatre. He believes farce to be all of the above and none of it. After producing and directing more than 30 plays in London's West End and directing and acting in the 18 farces he has written, including Not Now, Darling, Move Over Mrs. Markham, Funny Money, and Run for Your Wife, he ought to know.

Cooney insists that farce is closer to drama than it is to comedy. Most tragedies have as their theme an individual struggling against overwhelming forces, he explains. His actions to overcome what opposes him become the play. That a comedy must have a happy ending only changes the behavior of the characters. The plotline in a good farce should be interchangeable with that of a tragedy. A farce requires only a greater suspension of disbelief, as the solution to the problem has panic at its root, which tends to play out in eccentric and absurd behavior. This is compounded by characters having to come up with increasingly inventive strategies to get out of impossible situations.

Michael Frayn (Noises Off) has said, "Panic causes people to respond to crises in irrational but perfectly believable ways. Hasn't everyone had one of those days when everything goes wrong? You forget your door key, so you climb over the gate, which causes you to split your trousers. Because you've split your trousers, you take cover in the bushes. Because you're hiding in the bushes, a passing policeman demands that you give an account of yourself." How these small tragedies are resolved, and the extent of the mayhem produced, is the key to their categorization.

British producer Michael Grade has said, "The best farces appear simple on the surface. â€Ś They are pieces of precision engineering underneath." British farce is a perfectly stoked theatrical machine designed to keep the laughter quotient continually rising in the service of breaking down the audience's defenses.

What makes farce work, Cooney says, is that it must be a razor's edge away from becoming a tragedy. Bigamy, deception, and betrayal, as seen in Caught in the Net, are serious subjects. John Smith, the taxi driver and hapless bigamist from Run for Your Wife, the 1982 prequel, is caught in a web of lies when his son from his Chelsea household and the daughter of his Wimbledon wife meet on the Internet. By making Smith sympathetic, the play gets the audience rooting for him. Presto-changeo: comedy! Add the ever present threat of the hero getting caught, and that's standard farce. "If we do our job, it becomes like a thriller," Cooney says. "The audience spends the second act trying to figure it all out." Confusion is definitely key in the Smith family saga.

The beat of the farce is its music, Cooney says, not its language, because there are no flowery Shakespearian soliloquies for an actor to hide behind. An ordinary man dealing with an extraordinary situation has no time for philosophizing. Farce is regarded as one of the most skilled of all acting traditions. An actor playing farce must have tremendous discipline and a ferocious sense of timing. He must listen to the play, or he will tread upon a lot of laughs. He needs the other actors, and they need him; he must learn not to hold on to the ball too long, but to slam it into the opposing court as if he were in a fast tennis game. The plot may be contrived or concocted--qualities often associated with farce--but the playing must remain utterly sincere and truthful.

One of the challenges of farce is for the actor to overcome the desire to be "funny," says Cooney. Farce is funny by virtue of the situation in which the characters find themselves, and by the writer's manipulation of his convoluted plot. Physical precision is key, as is focus; the actor must be aware of exactly where the stage moment is and direct his actions and reactions to that focal point with impeccable placing. Which leads us to the three essentials that will always be required of every player in a farce: timing, timing, timing.

The tricks of the trade, if not born in the bone and bred in the blood, have become second nature to Cooney, who began acting at the age of 14, who never met a play he didn't like, and who never said no to an opportunity to work in the theatre. Although the origins of farce can be traced back to ancient Greece, to 18th and 19th century France, to Travers and Pinero in England, and even to Charlie Chaplin and the Marx Brothers, Cooney's craft was developed as an actor and writer in Brian Rix' Whitehall Company, and from his appearances in weekly rep, which involved playing in one play while rehearsing another. As a young actor, he also traveled with fit-ups--traveling groups that would set up shop in a small town for as long as a week or six, presenting a different play every night, from a repertory of 30 or 40. Cooney credits this solid experience for his disciplined approach to farce, and he expects those who work with him in his productions to drink at the same waterhole. BSW