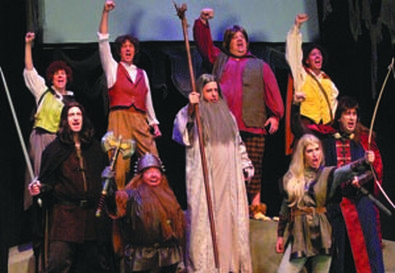 Photo Source: Chelsea Sutton
Whereas J.R.R. Tolkien's message in his classic book The Lord of the Rings is that friendship and goodwill triumph over prejudice and evil, writers Kelly Holden-Bashar and Joel McCrary's musical parody stage production injects another message into Tolkien's masterpiece: Laugh loudly and enjoy yourself! With a romping score by Allen Simpson and funny lyrics by the strength and combined efforts of the comedically gifted cast, this hilarious offering follows Peter Jackson's mega-hit film version, as told through satire and songs spanning a playful multitude of musical genres. Familiarity with the film version will help with the play's references but is in no way a prerequisite to enjoyment.

The story remains the same: In a make-believe land, a hobbit named Frodo (Cory Rouse) receives a ring that unfortunately holds evil and terrible powers. Accompanied by a fellowship of characters and creatures, Frodo sets off on an odyssey to destroy this ring, overcoming an array of obstacles along the way. The cast members—Brian D. Bradley, Lisa Fredrickson, Edi Patterson, Matthew Stephen Young, and Ryan Smith—take on double roles, creatively reinventing Tolkien's characters for the sake of big laughs by, for example, playing Bilbo Baggins (Steve Purnick) as a Gilbert Gottfried sort and Balrog (Peter Allen Vogt) as a gay lounge-singer diva.

Every player is a comedic gem, and it is a pleasure to watch this improv-based cast, empowered by seasoned chops, seem free to fire off an ad-lib now and then. Vogt, channeling Chris Farley, soars to comedic heights around the stage, effortlessly bringing down the house.

Director–co-writer McCrary possesses the impressive ability to deliver rapid-fire comedy from Jackson's epic, given that the source material isn't exactly a Judd Apatow film. The fantasy world of Fellowship! transforms the Falcon Theatre into a very real place to escape from a very real world to enjoy a terrific night of music and laughter.