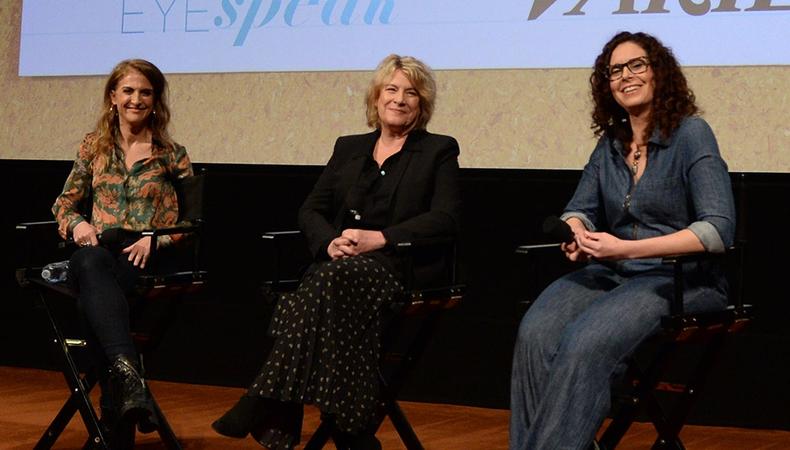 The conversation, moderated by Variety’s deputy editor Pat Saperstein, not only touched on the long and venerable list of TV shows shaped by the panelists, but also sparked a larger conversation on diversity and the role of women in Hollywood’s film and TV industry today.

On being a woman in entertainment.
Hall’s early experiences as a TV writer were heavily focused on sitcoms before transitioning into writing for drama. “Back then, things were quite different [for women], though they’re not different enough today,” said Hall. “I took twice as long as a man would take to leave and try to do my own show, because I felt like I had to really know how to do it. I felt like, if I made a mistake, I wouldn’t get another shot.”

Hall explained that when she first started to break into entertainment, there wasn’t a female showrunner in sight, so she adopted a “you have to see it to believe it” attitude. “I just sort of pictured myself as being competitive with these guys,” she said. “You have to have a little bit of a pioneering spirit if you want to do it and maybe make that your goal. Like, ‘Well, I’m going to be the person that shows people what it looks like.’ And just believe that you have a right to play in the game.”

“I employ my feminine instinct,” said Gussis. “I actually try to be the mama bear on my set and of my writers’ room.” After struggling with issues reconciling how to be both feminine and empowered, Gussis said she started to use the “comfortably aspirational” archetype of “goddess” instead of “woman.”

“I understood finally what it meant to step into power without being hard,” she said, “to be more open and just embody that in my own way. I felt like weirdly butch otherwise in a way that didn’t feel authentic to me either.”

On incorporating diversity into shows.
Gussis explained that when “staffing up” for “Insatiable,” she heavily took diversity into consideration. “I wanted it to be balanced,” she said, “but it wasn’t just about male, female. It was about diversity in general.... Because the show is set in a suburb of Atlanta, diversity was important to me. And also because the show has a lot of queer themes, diversity was important to me. I wanted to have a balance of LGBTQ and ethnicity and background.”

For “Madam Secretary,” Hall explained that the show’s of-the-moment politically charged themes put it into a “great position” to incorporate more diversity. “We get to show not just all kinds of diversity but different cultures,” she said. “Behind the scenes, of course, you’re looking for people who have that perspective who can help you realize that.”

Sometimes, explained Urman, the need for diversity even extends to gender in unexpected ways. “I love the show, I love the cast, I love the crew,” she said of “Jane the Virgin.” “I think we’re eight or nine women and three men in the room. I did have to call and say, ‘I think I need a man in this room. I just needed a voice.

“We’ve always been 80 percent female directors since the beginning. I didn’t have the expectation that only men are interesting visually and have something to say. The people who came and interviewed for that first season, who understood the gaze...were women, and those were the people that I reacted to.”

And for “Jane the Virgin,” which is modeled after a telenovela (containing a lot of direct plot elements related to that soap opera style), adding in more diversity was a crucial way for Snyder Urman to accurately nail those themes. “I wasn’t sure at the beginning if I was going to be the person who could write [the telenovela plot points],” she said. “That was something that I struggled with, but I had such a strong vision for what the show would be and what the relationships would be.

“I figured I’d just have to hire enough people that have the specificity. I rely on other people to fill in what I don’t know, but I also do know these characters. I know them so well.”

On creating for streaming versus traditional or cable TV.
As streaming services like Netflix, Hulu, and Amazon compete with over-the-air and cable TV, the shift presents both challenges and opportunities for showrunners like Gussis. “I actually think there’s more pressure because it’s Netflix,” she said. “How do you get Netflix to market your show when they’re producing so much content? How do you do the jazz hands loud enough that they pay attention? How do you get your executives to trust you, but also feel like they’re involved enough that they love you and that they want to champion you at Netflix?

“I had to really learn to walk the line of, ‘This is my vision, this is how I want it to be,’ without being combative. You need them to be your allies because otherwise, you get lost in the sea of amazing content. You need people to champion you, and you need to invite them into your process, and be open and open-hearted and collaborative.”

A major difference is abandoning the “self-contained” episode format for plots that encourage viewers to binge watch. “On ‘Dexter,’ we tied up every episode at the end,” remembered Gussis. “That’s the worst thing to do for a Netflix show. If people binge the whole series, that’s how you’re a hit. On some level, it’s more pressure that they have to watch the whole thing at one time. It’s a 12-hour movie. It’s crazy.”

On the other hand, Hall explained that she’s only ever worked on network shows and loves it, mostly because it’s “free.” “I loved figuring out how to make [a network show] as good as anything within the restrictions,” she said. “Because the restrictions kind of give you a great challenge to see if you can really compete with any art form.... I like being able to put out that many episodes and have that big of an audience and understand that anybody can watch it.”

On ‘breaking a story.’
One of the hardest, but arguably most important, parts of the showrunning process is “breaking” the story—tearing it down and building it back up to explore every possible angle and outcome the plot could possibly have to maximize the impact. Because it falls before the final concept and script come together, Urman refers to breaking as “the math of the episode.”

“I love a really good break,” she said. “It allows you the freedom to really go write your characters and the heart and the jokes. I think that’s a really important part of the process, because sometimes you fall in love with something, and then you just can’t keep it. And you have to serve the story, serve the character.”

On making ‘rookie mistakes’ early on.
When she was still working as a writer’s assistant, Gussis said she made “every rookie mistake in the book,” so, by the time she was staffed, she wasn’t prone to those pitfalls when it really counted.

What were those mistakes?

“Not being able to take the temperature of the room, not knowing, ‘Maybe I shouldn’t be pitching if no one cares what I have to say,’ ” she advised. “If they care what you have to say, they’ll ask, and then you better be ready to have something really good to say.”

Some mistakes were more superficial than others, she said. “Making noise while unwrapping a Luna Bar, turns out, is a super annoying mistake that makes the showrunner hate you.”

On time management.
Even though the panelists were all showrunners or writers on different projects, they all also made time for their own writing, whether it was creating specs, developing pilots, or crafting novels and poems. Understandably, an important question came from an audience member who simply wondered: “How do you make time for it all?”

“For me, delegation is key,” said Hall. “Hire people you trust and let them do their jobs, and you’re all on the side of the show. If the show wins, everybody wins.” Another piece of advice: respect everyone’s jobs. Create an environment where there’s “an intolerance for people complaining about their jobs or complaining about how hard their jobs are—as if all of our jobs aren’t hard. If you acknowledge that every part of the show is important, then you don’t have to keep proving that to people, and people work with that sense of pride of ownership.”

Urman credits her writers’ room for taking some of the burden of the “day-to-day detailed work” and allowing her to step back and focus on the big picture. “The more work you have, the better and more efficient you are,” she added. “It’s practice—you get better thinking creatively in quicker and shorter time schedules the more work you have.”

On being a showrunner.
As a showrunner, Gussis said she’s learned to “trust the process” above all else. “The best thing I can do is get out of the way and let the ideas come through me,” she said. “The more my ego gets in the way, the less good I am. So, I’ve stopped thinking that I’m in control of what the show is. I just write what feels right to me. It’s a gut thing.”

“I want the audience to always know that they’re being told a story, and they’re in the hands of a storyteller,” said Urman. “We’re not doing things randomly. Everything’s going to pay off.”

Gussis agreed. “Just tell your truth. That’s it. And people will respond hopefully, because you're being honest, and somebody out there will feel less alone.”

According to Urman, the most important part of being a showrunner is having confidence and knowing that you’re driving the momentum—so if your confidence falters, everything bottlenecks. “Through having this job and seeing [my] choices and decisions validated, it’s given me more confidence,” she said. “When you’re running a show and doing so many episodes, you just don’t have time to question yourself or your instincts, so it forces you to be more confident than perhaps you ever were before in your life.”