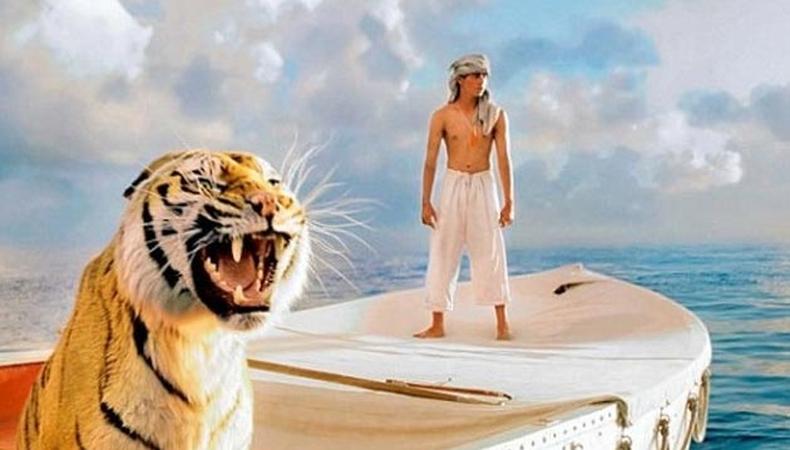 Voting has closed. There's no more campaigning to be done. There will be no more questionable celebrity endorsements, no more stumping from actors and filmmakers, and no more talk about whether "Zero Dark Thirty" endorsed torture or not. On Sunday, Feb. 24, we will all learn the final victors of the 85th Annual Academy Awards. This will bring a close the weirdest, most unpredictable, and often nasty Oscar season in recent memory.

So when all is said and done, who do we think will take home the gold? Check out my completely unscientific predictions below. I'm betting on "Life of Pi" to take the most overall wins, with technical awards and a prize for director Ang Lee. But "Argo" is likely to claim at least three wins--including the big one. If only they had whipped up an original song!

Prediction: “Argo”
With a clean sweep of the guilds—PGA, DGA, WGA, and SAG ensemble—it would be tough to beat “Argo.” There might be a surge for “Silver Linings Playbook,” but it would be a colossal upset at this point. While some people have recently come out to complain about “Argo,” many are the same people who praised the film on its initial release. It might be a safe choice, as opposed to, say, “Zero Dark Thirty,” but that doesn’t mean it’s a bad choice. It’s a well-made, expertly acted thriller that balances drama with moments of levity and some great one-liners.

Prediction: Ang Lee
This is really viewed as a three-man race between Lee, Russell, and Spielberg. Russell didn’t get a nomination from the Golden Globes or DGA, which would make a win at the Oscars an anomaly. But don’t discount the love for “Silver Linings”—just look at all those acting nominations, and actors make up the largest contingency of voters. Spielberg could coast in on being Spielberg, but while his film is much-admired, it’s not beloved. But “Life of Pi” is, as is its director. Lee was the only director to receive nods from everyone: the Oscars, Golden Globes, DGA, and BAFTA (who left off Spielberg). Lee not only mastered the technical aspects of “Life of Pi” (and you can expect the large amount of tech voters will recognize that), he handled the human aspects of the story, as well. And people still remember his “Brokeback Mountain” losing to “Crash”—though Lee did win director that year, some payback for that picture loss might be in order. All that aside, the film is a towering achievement by a well-loved artist.

Prediction: Daniel Day-Lewis
Do we even need to discuss this further? Day-Lewis takes home his third Oscar for best actor.

Prediction: Jennifer Lawrence
First it was Chastain who was supposed to give Lawrence a run for her money. The SAG Awards settled that. Now it’s Riva, who beat Lawrence for the BAFTA Award. But when all is said and done, Lawrence will likely be left standing victorious.

Prediction: Christoph Waltz
By far, the toughest one to call, and I will likely change my mind several more times before the ceremony. It all comes down to DeNiro and Waltz. I’m giving Waltz the edge only because DeNiro hasn’t won a single precursor award, while Waltz has taken the Golden Globe and the BAFTA Award. Jones did win the SAG Award, so I’m not counting him out, but he didn’t have to compete with Waltz there.

Prediction: Anne Hathaway
Again, no discussion necessary. She might be even more of a lock than Day-Lewis.

Prediction: “Argo, ” Chris Terrio
The Critic’s Choice win for “Lincoln” and BAFTA win for “Silver Linings” confused things, but at the end of the day, “Argo” won the WGA Award and is likely going to win best picture. Some say people might throw Russell a vote here instead of in the directing category, but the ballots don’t have the writer’s names on them, so many might not know it’s the same person. In the end, I think it’s a year where screenplay and picture match up.

Prediction: Quentin Tarantino, “Django Unchained”
I love Tarantino, but thought the “Django” script was a bit of a mess. Still, one can’t argue with the Golden Globe and BAFTA Award wins, or the fact that you can definitely recognize a Tarantino script when you see one. Boal and “Zero Dark Thirty” took the WGA Award, but “Django” wasn’t eligible for that one. And while some think “Amour” has a shot, I’m sticking with Tarantino.

Prediction: “Wreck-It Ralph”
Pixar is tough to beat, but “Ralph” was just a more clever film.

Visual Effects
"The Hobbit: An Unexpected Journey"
"Life of Pi"
"Marvel’s The Avengers"
"Prometheus"
"Snow White and the Huntsman"