Frank Grillo has played a tough-but-endearing protagonist in the “Purge” franchise, one of the many villains of the Marvel Cinematic Universe, and given dozens of other notable performances throughout his career. Next up, he stars in the upcoming film action-comedy “Boss Level” on Hulu, which he also produced after years sitting with the passion project. From director Joe Carnahan, the feature also stars Mel Gibson and Naomi Watts. Grillo recently hopped on Instagram Live to talk about how he established himself as a Hollywood action hero, how he builds a memorable character, why he views “Boss Level” as “Groundhog Day” meets “Diehard,” and more. 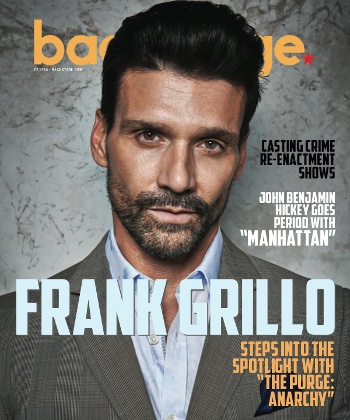 The Long-Delayed Success of Frank Grillo

“Boss Level” was shot in just 27 days.
“We had a lot of time allotted for rehearsal to learn sword-fighting—I had to jump out of buildings and things like that. And all of the sudden we were faced with the fact that we didn’t have the time to rehearse. So, fortunately, thanks to my training and my being in the shape that I was in for weeks and weeks before shooting the film, I was able to kinda just do it. And it’s amazing when you’re under pressure, and you know you have to execute something, it’s amazing what you’re able to do. And Joe [Carnahan] and I learned a valuable lesson in filmmaking, and that’s that we don’t need as much time. You don’t need all of the bells and whistles that you think you do.”

Grillo loves making films that surprise people.
“We get to redefine what people think of a particular type of movie. And the greatest compliment that I’ve gotten from people who have seen the film is, ‘I didn’t know what to expect and I was really blown away by the movie. I thought it was gonna be one thing, then it was another thing,’ or, ‘I thought it was gonna be this, and it was this plus that.’ And I think our mission statement, Joe Carnahan and I, is to do just that: take what people would think is an action film or a thriller and turn it upside down and elevate it.”

READ: How to Get an Acting Agent With Backstage

His relationship with Backstage has come full circle.
“Well into my 40s, I did ‘The Grey,’ and people in the movie business took notice, and then I started to get all kinds of other opportunities. I’m incredibly goofy as a guy, but I’m incredibly serious as an actor. I take what I do very seriously, I’m learning constantly, I’m a student of acting, and so here I am, talking to you. It’s amazing. I mean, Backstage—which was a big part of my life as a young actor, you know, looking in the back of Backstage. Backstage was the journal for struggling actors, still is.”

“I would worry less about the result, OK? Less about being right, and more about being curious and constantly working towards anything that can help your craft.”

On why he doesn’t just memorize lines.
“What I do is I read the script many times, I understand the given circumstances, I take out the information, and by then, I know this guy so well and I understand why I’m saying these things that the lines are in my head, right? So, it’s so much less about memorization, and so much more about preparation…. I read the script one time, the first time, and I write a lot of stream-of-consciousness, because you can never read the script the first time ever again, right? So I like to write. I write a lot about whatever it may be: a feeling, a memory, whether it’s nostalgic in some way, or whether it’s a fact, whether it’s a discovery. The first time you read the script is probably the most information that you’re kind of discovering. And then I read it over, and over, and over again, because you learn more about yourself from the other characters than you do about your own lines many times. So that’s how I start the process, and then it becomes physical thing: I start to see how I look, how I walk, how I sound, what literature this character reads and why, and, you know, I start to create musical lists for myself and it just keeps building and building and building to where by the time I get on set, my DNA, I’m an entirely different person.”

Grillo’s advice for young actors includes focusing more on real experiences.
“I would worry less about the result, OK? Less about being right, and more about being curious and constantly working towards anything that can help your craft. And by that I mean go to museums, sit and stare at a painting; watch people in your everyday life; read, read, read. It’s not about getting an audition; in your early stages, it’s about becoming a full human being, being able then to recall things that you’ve experienced. If you live in New York, if you live in a metropolitan area, we have so much opportunity to go and to be around things that stimulate our imaginations, and acting at its core is about imagination. So keep yourself alive with your imagination. It feeds your craft.”