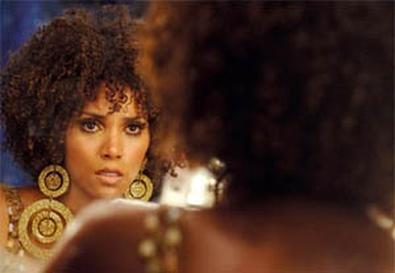 The lure for actors in playing a person with a multiple-personality disorder is irresistible. It's the chance to portray three, four, or even 16 characters all in one turn and offers actors the opportunity to stretch. It worked for Joanne Woodward, who won a best actress Oscar for playing "The Three Faces of Eve" in 1957, and for Sally Field, who took home her first serious showbiz award, an Emmy, for displaying all those different facets of "Sybil." Toni Collette picked up an Emmy for doing the same thing, though a bit more comedically, on Showtime's "The United States of Tara." So it is no wonder that Halle Berry was attracted like ducks to water to "Frankie & Alice," the true story of a young woman at battle with her racist alter-ego and trying to regain her life. It's a role that screams, "Oscar! Oscar!"

Berry uses the opportunity not to chew the scenery but to really get under this person's skin. It's nice to report that this fine actor, who is given too few great dramatic opportunities (even after the Oscar for "Monster's Ball"), delivers her finest screen hour here, a personal triumph in every way. Berry is brilliant in this magnetic and emotionally powerful acting tour de force.

Unfortunately, the film itself, directed by Geoffrey Sax and written by no fewer than six credited screenwriters, does not hold the same standard of excellence as its star, and without her there wouldn't be much to say.

Frankie (Berry) is a hot pants–wearing, Afro-sporting cage dancer in a seedy Hollywood club in the 1970s. During a late-night hookup with her club's DJ, she goes ballistic, losing her true self into a trio of disparate personalities quoting Bible passages, flailing arms, and basically freaking out. At one moment she's "Alice," a racist Southern, white woman; the next she's "Genius," a 12-year-old girl. For this, she eventually finds her way to Dr. Oz (not the guy on TV that Oprah likes), played with relish and restraint by Stellan Skarsgård. He figures out her problems are rooted in memory repression and begins the long psychiatric journey to bring her out of her own darkness and "into the light." The three faces of Frankie have various reasons for their existence in her head, and in fact one deals, of course, with her mother, played beautifully as always by Phylicia Rashad. Ultimately, though, this is strictly an acting showcase for Berry. She seems drawn like a magnet to the challenges of playing these kinds of emotionally overloaded characters, but resists any temptation to take it too far. This is a major achievement in itself with this kind of material that is loaded with land mines a lesser actor might step all over.