A Free Man of Color 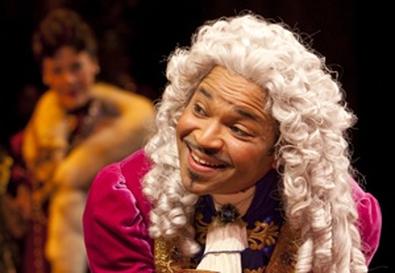 Photo Source: T. Charles Erickson
In the issue of the Lincoln Center Theater Review that accompanies John Guare's new play "A Free Man of Color," a joint interview with Guare and director George C. Wolfe is headlined "An Exhilarating Collision." The title is entirely apt. The collaboration is exhilarating because both men are among the top artists in their respective disciplines and are bringing formidable skills to fascinating subject matter. But the result of a collision is usually painful and messy, and that's certainly the case at the Vivian Beaumont, despite the lavish and loving production.

This sprawling epic is part Restoration comedy in rhymed verse, part history lesson, part political drama, part starry spectacle, part metatheatrical Brechtian polemic, and wholly confused. At its center is Jacques Cornet, a freed slave in Spanish-owned New Orleans at the dawn of the 19th century. Cornet managed to purchase his freedom and was made his white father's heir, becoming extremely rich and infuriating his disinherited legitimate white half-brother. Cornet's obsessions include his dazzling wardrobe, buying endless maps in hope of finding a western waterway that will open up the continent, and bedding every beautiful woman in sight. His story is juxtaposed with the events that caused President Thomas Jefferson to make the Louisiana Purchase. In order for that to happen, the Spanish king has to trade the domain to France, Toussaint Louverture has to lead a slave revolt in what is now Haiti, the French have to fail in putting it down, and Jefferson, scared of the effect on the South, has to make his famous purchase to keep the French and the Haitians out. When New Orleans becomes American, however, the freewheeling society in which we are told "race is a celebration" and where Cornet has flourished is abruptly altered. Cornet loses everything and is sold back into slavery.

Guare's inventive but scattered script resists Wolfe's vibrant but busy staging at almost every turn. One idea that does work is the late turn into seriousness in Act 2. Form mirrors content as the giddy Restoration style gives way when Cornet's fortunes speedily decline. Unfortunately, Guare belabors the point, with too many final attempts by Cornet to control the play he is writing (and we are seeing) by making the political figures of his time spare him. Ultimately, it undermines the tragic finish.