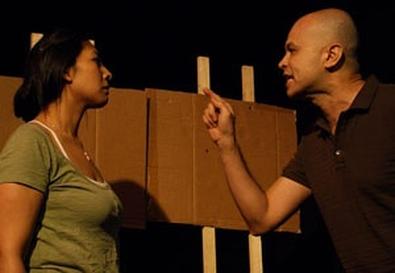 Photo Source: Dan Applegate
Playwright Marisa Marquez is on to something here, with a clever setup and worthwhile insight into her 24 characters. An overbuilt, cheesily upscale, gated housing development in Northern California's wine country provides the setting for a group of up-to-date polyglot racial and ethnic households. You could hardly call them a community, as the interaction among these families is almost nonexistent, save for two competitive neighbor mothers. But the nuclear units are all of a piece in their pursuit of the American dream by buying and furnishing McMansions they can hardly afford and certainly don't need. Possessions most often trump passions in Las Peñas Hills.

Marquez takes us behind the larger gates and into several separate homes to find her characters mostly fighting—about their lifestyles, children, sexual dysfunction, and other forms of incompatibility. "Every marriage should have sedatives," one character exclaims early on, and the other couples and kids on view go on to prove just that premise. Greedy, if not shady, real-estate brokers also appear in the mix. Director Danny Williams keeps the action moving briskly, as if the 90-minute piece weren't all talk and little action.

The seven actors, all in multiple roles, are consistently good. Three of them—Austin Mitchell, Susan Quinn, and Marquez herself—play three very distinct roles each. Andrew Eisenman, Erin Adams, Megha Nabe, and Chris Kloko, with two characters apiece, also manage to make them separate and believable without the aid of much costuming or scenery, though David S. Goldstein's movable panels of broker signs are effective enough in keeping the playlets apart. But overall there are a few too many characters to keep track of, and one scene should be eliminated entirely. In it, a delusional wife of South Asian (Indian) extraction drives her patient, loving husband finally to leave her after almost five years of marriage, despite her being his boss' daughter. The wife is so sui generis crazy that the scene makes little sense in, or contribution to, the play's larger context. It's a gate too far.

Also, although the characters talk quite a lot about money, the play is set in 2007, and therefore pre-recession and lacking in any real economic angst. You can't exactly call it nostalgia, but if Marquez wanted to update her text to include the threat of losing at least one of these hideous piles in the development, it might deepen her examination of priorities in the 21st-century American quest for fulfillment.