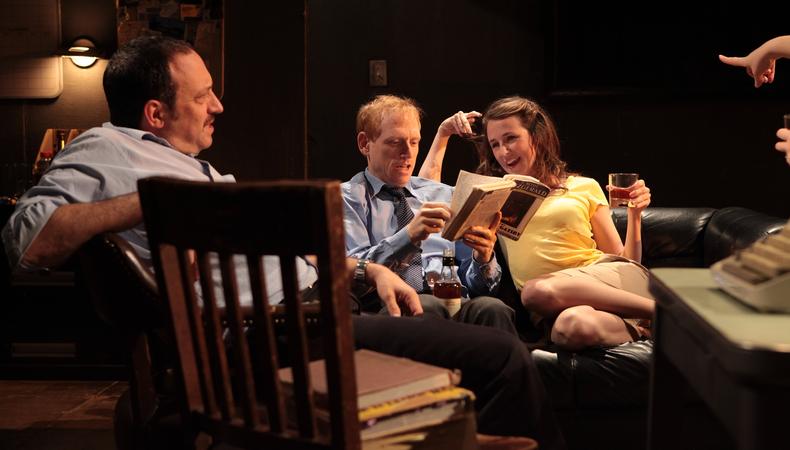 The spirit of F. Scott Fitzgerald permeates “Gatz” at REDCAT, as do the ghosts of David Belasco, Joseph Papp, and John Houseman, for starters. In its breathtaking L.A. premiere, Elevator Repair Service's marathon embodiment of “The Great Gatsby” is a watershed theatrical event.

By now the basic premise and the company’s long struggle to get the rights to Fitzgerald’s 1924 Jazz Age masterpiece are much-documented. Suffice it to say that the novel is served up intact, in an eight-hour presentation—including two intermissions and a dinner break—that resembles a mesmeric fever dream.

The first sight of set designer Louisa Thompson’s deceptively nondescript office hardly portends what’s in store. But with the entrance of the heroic Scott Shepherd, whose overcoat-wearing corporate drone initially battles a recalcitrant computer to knowing chuckles from the house, our attention is riveted. When he opens a Rolodex, pulls out the novel, and starts to read it aloud, time and space cease to exist.

No superlatives do justice to the players, cast for rightness of quality over physical type, which only heightens their grasp of character truth. Shepherd, who suggests the emerging William Atherton, is beyond praise in what amounts to a tour de force filibuster. He dovetails marvelously with Susie Sokel’s elfin, deadpan Jordan, as well as with the central triangle of Jim Fletcher’s unconventionally resonant Gatsby, Victoria Vazquez’s laconically mercurial Daisy, and Robert Cucuzza’s jovially explosive Tom. Laurena Allan gives Myrtle a daftness that conceals immense feeling, and Frank Boyd digs way deep as the inchoate George. Kate Scelsa, Kristen Sieh, Greig Sargeant, Mike Iveson, and Ross Fletcher complete as extraordinary an ensemble as Los Angeles has been privileged to witness since Matthew Bourne’s troupe last came to town.

As for the show itself, one must go even further back, to the Royal Shakespeare Company’s “Nicholas Nickleby,” but even that misses the point. In its simultaneous devotion to Fitzgerald’s text and ingenious expansion upon it, “Gatz” looks forward to an entirely new American theatrical form. It is quite simply not to be missed. Good luck snagging tickets.