The Geographical History of America 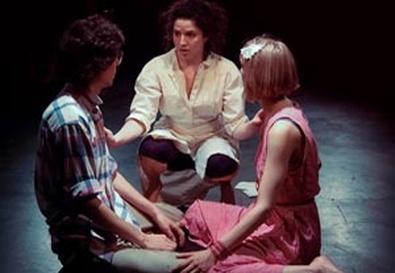 Photo Source: Josh Pesavento
Lindsey Hope Pearlman and Randi Rivera's adaptation of Gertrude Stein's 1936 novel is, well, novel. (The full title of the source material is The Geographical History of America or the Relation of Human Nature to the Human Mind.) It begins with three performers (Pearlman, Julia Crockett, and Phil Gasper) creeping into the KGB Bar, their eyes darting to and fro. Then they stare into the eyes of the audience—hauntingly, expectantly, perhaps with an element of fear or intrigue. Whatever it is, it's a lot of meaning for Rivera, who directs, to infuse into the meaningless.

Next, they amble to the end of the bar and hoist themselves upon it. Smiling mischievously, they execute some tightly choreographed movements, including rounds of intricate hand-clapping, leaning and shifting their bodies this way or that, twisting their torsos, and generally thrashing around. Welcome to Steinworld.

Their nondance dance done, the performers exit the bar as cautiously and quizzically as they entered, except now the audience follows them up a flight of stairs and into the theater. As everyone sits, Dylan Scott plucks away on a guitar, accompanying himself on harmonica. The performers, meanwhile, are splayed out on the floor, enraptured by pads of paper on which they scribble. As the play "begins," they fetch markers and write phrases—"human nature" and "human mind"—on white boards along the upstage wall.

As in all things Stein, it's hard to analyze what follows. For example, along one of the theater's red-painted walls a map of the United States is projected. At various points in the 60-minute piece there is more silent choreography, including a tug of war and a dreamy game of musical chairs. There are poses and pratfalls, plus artful, poetic, whimsical, mystical tableaux. The performers utter both verbal fragments and whole sentences exploding with deep thoughts and burning ideas. There are a few fully formed lines so pointed—like "Is Franklin Roosevelt trying to get rid of money?"—that they reverberate in our minds. Did Stein write those words decades ago or were they delivered yesterday on Fox News? I think both might be possible.