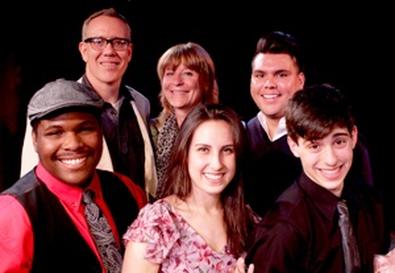 The winners of the Gershwin Awards and New York City’s Gershwin candidates for the National High School Musical Theatre Awards (NHSMTA), also known as the Jimmy Awards, were determined on Saturday at the CAP 21 Studios in New York City.

High school senior Javan Zapata, 17, was nominated for the Up-and-Comer Award after his performance of “Epiphany” from “Sweeney Todd: The Demon Barber of Fleet Street.” Zapata was awarded a full scholarship to Camp Broadway’s summer program, The Next Step. Best Lead Actor went to Josh Schwartz, 16, and Kyra Leeds, 17, took home the Best Lead Actress Award.

Schwartz and Leeds will go on to the Jimmy Awards, a national competition where they’ll receive six days of coaching from Broadway professionals at the Minskoff Theatre, home to Broadway’s “The Lion King.” They will also receive a full scholarship to CAP 21’s summer pre-college musical theater training program and musical college auditions prep program, as well as $1,000 to be used towards their education.

For Schwartz, a performer since 5th grade, winning the award gave him more than scholarships and bragging rights. It gave him confidence.

“I’ve had breakdowns where I’m up in my room, head in my hands, breathing and thinking, how am I going to do this?” he told Back Stage. “This award ensures that I’ll never feel like that again.”

The awards, created in 2011 by CAP 21 and Camp Broadway, are designed to recognize high school students in the New York City Metropolitan area and Long Island for their outstanding achievement in their high school’s musical theater productions. The ceremony is named for the songwriting brothers Ira and George Gershwin (“Porgy and Bess,” “Girl Crazy”). All participants and their teachers received free tickets to Broadway’s “Nice Work If You Can Get It,” starring Matthew Broderick and Kelli O’Hara, with music by George Gershwin and lyrics by Ira Gershwin.

The students’ ensemble work kicked off the competition. The 18 nominees, all chosen by their teachers to compete, sprang from their seats on cue in the small theater and ran to the stage in the CAP 21 studio to perform “Hairspray’s” “Nicest Kids in Town,” a routine they learned in 90 minutes that morning. Nominees then went on to show the judges what they were made of with their solo performances.

“This is a great way to see young talent and meet new young kids,” said Cesar Rocha, a casting associate of Telsey + Company, who was also judge last year. Eliza Ventura, artistic director and co-founder of CAP 21, and David Chase, music supervisor for Broadway’s “Nice Work If You Can Get It,” also served as judges. “I can say, ‘That person would be great for this role in a couple of years,’ or ‘We should call this person for this role.’”

“These kids put such hard work into what they do,” said Javan’s father, Charles Zapata, after the awards were given. “I used to play football and [Javan’s] a performer. They put as much into performing as I did with football. Anyone who thinks arts should be cut is silly. These kids are learning life lessons.”

Briana Rodriguez
Briana is the Editor-in-Chief at Backstage. She oversees editorial operations and covers all things film and television. She's interested in stories about the creative process as experienced by women, people of color, and other marginalized communities. You can find her on Twitter @brirodriguez and on Instagram @thebrianarodriguez
END_OF_DOCUMENT_TOKEN_TO_BE_REPLACED