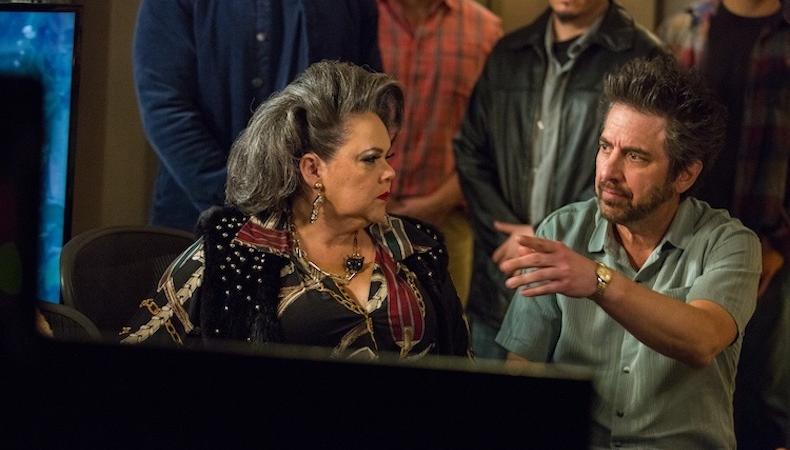 “I love stories about tough guys with vulnerabilities,” says Davey Holmes, whose Epix dark comedy “Get Shorty” is coming up on its Season 2 premiere Aug. 12. “The idea of a thug finding an artist inside himself and getting seduced by and struggling with the creative process seemed like a premise that is funny and wouldn’t get old.”

The series is based on the Elmore Leonard novel of the same name—also adapted into a 1995 film starring John Travolta and Gene Hackman—about a hitman who comes to Los Angeles and unwittingly finds himself becoming a studio filmmaker. “We paid attention to make sure we weren’t just making the movie for the small screen. My sensibility is different from the movie, as much as I love it.”

Holmes had passed on the pitch when it first came across his desk, having just signed on to a list of other projects. “I got off the phone with my agent, and I thought about it. Twenty minutes later, I said I really wanted to do this,” he recalls. “It seemed wrong to pass. I was working on other stuff at the time, but ‘Get Shorty’ was the one.”

On the series, Chris O’Dowd plays Miles Daly, the mobster-turned-movie producer, and Ray Romano plays haggard B-movie producer Rick Moreweather. “When you’re looking at real actors to play this imagined person, the character morphs. It’s a crazy thing,” Holmes says of the casting process. Romano’s Moreweather, for example, “has more soul than I had thought; he’s empathetic.” Daly was wide open, too. “I didn’t want him to be a Travolta. He just needed to have whatever form of charisma and twinkle that actor brought to the table, and Chris brings that in spades.”

In casting, Holmes finds there is always an opportunity for actors to come back if one part isn’t quite right for them. “My overall spiel is there’s a part out there for everybody,” he says. “You have to just show up, do the work that feels true to you, and know there are a lot of factors that go into it. You cannot take it personally. So many times I see an audition, I think an actor is fantastic, but they’re not going to get this part because of reasons that are so random.”

On the flip side, “just like losing the role before, an actor could also get cast for a very specific reason you never see coming.” On “Get Shorty,” Holmes and casting director Rachel Tenner make sure to keep stock of actors who impressed them in the room. “We’ll come back to them and offer them something they didn’t audition for later. I’m sure they’re surprised to get a straight offer,” Holmes reveals. “When the work stands out, we really will come back to their tapes.”

As the series heads into Season 2, Holmes says he didn’t shy away from deviating from the source material. “We continue to ask ourselves, What would these characters do, and what’s an interesting way to turn things on their head?” he says. The creator points to dramas such as “Mad Men” and “The Sopranos” that continually shifted over the course of their seasons. “You have to reassess what the characters care about and what they’re fighting for, and that’s true for us. We work hard so you don’t feel fatigued.”

Even for a showrunner who’s been working the last decade on series like “Shameless” and “In Treatment,” Holmes finds that he’s continuing to learn and grow. “You can stand up for yourself creatively without ruffling feathers or declaring war—that’s still a lesson I struggle with.” And no matter how many times you write a script, it never gets easier. “Every time I finish a script I think, There, I’ve learned how to write. It will never be hard again because I know how to do it perfectly and easily,” Holmes jokes. “And then I start the next script, and I think, Wait, I have no idea how to do this.”

Want to work on a series like “Get Shorty”? Check out Backstage’s TV audition listings!