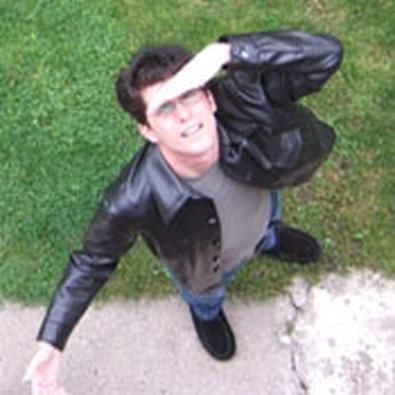 Cities lie in ruins, panic fills the streets, and the military is on the offensive as a hulking mechanical monster cuts a swath of destruction across North America -- an invisible monster no less. In fact, the Giant Invisible Robot -- or GIR for short -- is an unpredictable terror, powering up his death beams and focusing them on random targets as he wreaks his cruel vengeance against humanity.

Too bad Under St. Marks, where writer-performer Jayson McDonald's one-man show is currently playing, isn't one of the robot's targets. Presented as part of the Frigid New York festival, Giant Invisible Robot is the tedious story of Russell, an abused boy who creates an imaginary friend capable of unleashing the rage he holds inside. As Russell grows older, his destructive robot friend becomes his only source of companionship in a life paralyzed by loneliness.

An annoying combination of pratfalls, miming, and silly voices, Giant Invisible Robot comes off more as a private performance than a solo show. McDonald pantomimes invisible props, provides Foley-like sound effects, and dons various costume pieces as he plays different characters, complete with asinine goofy dialects. With an army cap, a pair of aviator sunglasses, and a redneck twang, he becomes General Panic, an apoplectic commander with a propensity for vulgarities. Or by slipping into a white lab coat and a British accent, he becomes a pompous research scientist.

As tediously trite as these performances are, they unquestionably illustrate McDonald's stage rigor. Unfortunately, the same can't be said for his writing: The scattered and underdeveloped vignettes that make up Giant Invisible Robot leave more plot holes than, well, a metropolis leveled by a destructive robot. Despite McDonald's 11th-hour attempt to tie everything up, the final payoff reads more as maudlin manipulation than earned emotion. Sadly, in the end, Giant Invisible Robot simply does not compute.

Presented by Stars and Hearts as part of Frigid New York