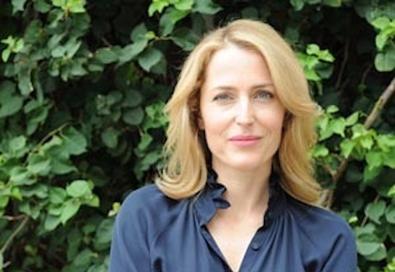 Photo Source: Jamie Painter Young
Gillian Anderson has battled alien invaders, faced shadowy conspiracies, and played some of the most memorable women in literature. So, what intimidates her? Watching herself onscreen. "The first time I see something I'm in, it's very hard for me," she admits. "I've got one thing on my mind and one thing only: picking apart my performance." Fortunately, she recently had a second chance to see her new comedy, "Johnny English Reborn," and was able to enjoy it much more this time around. As the single-minded agent brought in to revamp MI-7, Anderson's character brings the bumbling secret agent Johnny English (Rowan Atkinson) out of retirement to wreak more havoc on the world. "I laughed during the entire thing," she says. "And all I could see were 50 adults in front of me, bending forward. I'm assuming it was laughter, unless there was something wrong with the popcorn."

Below, five other things you might not know about the "X-Files" star:

Though some might be immune to the sex appeal of Atkinson, best known for goofy characters such as "Mr. Bean," Anderson says she totally understands why some women find him attractive. "I think there's an aspect of him that is very sexy," she says. "When he plays sexy in this film, it's so contrary to the way you see him, it almost makes you uncomfortable. But both on-camera and in person, there is something incredibly sexy about him." She admits she may have a certain type. "My first big crush on a celebrity, other than the Bay City Rollers when I was a youngster, was Buster Keaton. There's a bit of a similarity there."

Even as the ostensible straight man, Anderson gets her share of laughs in "Reborn." It's not such a surprise when you recall just how funny she could be on "The X-Files." "Thank you for saying that!" she exclaims. "A lot of people either don't remember or didn't watch it enough to remember we did quite a lot of comedic episodes." In addition, she says she's done quite a bit of comedy in the theater, as well as the films "Boogie Woogie" and "Tristram Shandy: A Cock and Bull Story." And she's currently attached to the period zombie comedy "The Curse of the Buxom Strumpet," based on the short "E'gad, Zombies!," alongside Ian McKellen and Judi Dench. "So many people ask about that," Anderson says. "I've been attached to that for about a year, but it has yet to see the light of day. It's very funny. We'll see if they pull it together." Anderson says she hasn't purposely been seeking more lighthearted fare. "Every once in a while, I get offered a comedy that's actually funny, and I take it. It really does come down to the script. When something appeals to me and all the elements seem right, I jump."

3. She's not intimidated by the classics.

Anderson has already tackled adaptations of such beloved novels as "The House of Mirth," "Bleak House," and "The Crimson Petal and the White." And soon she'll be seen in the most iconic of roles: that of the wealthy spinster Miss Havisham in a BBC miniseries adaptation of Charles Dickens' "Great Expectations." But isn't she a little young for the part of the spurned bride who descends into obsession? Anderson points out, "If you think of the age she was actually written, she would have been wed in her early 20s, and we know it's been 15 years since the wedding day. So, actually, I'm old for it! Dickens does describe her as being haggard and withered and old, but when you actually do the math, it feels justifiable." She adds that when she takes on famous works or plays notable people—such as Wallis Simpson in the miniseries "Any Human Heart"—she doesn't watch previous portrayals. "I don't want to have that in my head; I don't want to be influenced in any way by it," she says. "When I read a script or a novel, I only agree to do something if I get a very clear visual and take on who the character is. And there's some kind of click of recognition that takes place in my body, and a part of me says, 'Oh, I know who this is.' So if I were to then look at someone else in the part, I would think it would be too confusing to dissect what was my pure instinct and what was somebody else's instinct. So I try not to."

4. She didn't have a publicist for years.

Anderson has mastered the costume drama and made audiences believe in little green men, so it's surprising to learn she considers her most challenging role to date that of a film publicist in the movie "How to Lose Friends & Alienate People." She explains, "I chose to do that film without understanding the character. And I assumed I'd be able to find her along the way, and I don't ever feel like I found who she was. So that was kind of excruciating." Part of the struggle, Anderson reveals, is that she'd never had publicists and really didn't know how they worked. Wait a second: How is it possible Anderson graced countless magazine covers and spent years on a hit TV show without a publicist? "The show was so popular, it seemed at the time there was no point," she reasons. "Every free weekend I had was busy doing photo shoots anyway, and everybody was coming to us. It seemed crazy to spend money on a publicist." She finally broke down about three years ago when she met Kelly Bush of ID-PR at Cannes. "We ran into each other in an elevator and started talking and hit it off," she recalls. "Later, we were driving away and she was on the side of the street, and my partner said, 'There she is again. You should meet up with her.' So I rolled down my window and asked if we could meet for coffee. And that was that."

5. She considers her early work 'terrible.'

Anderson recalls that after graduating from theater school at DePaul University, she landed an agent at William Morris through a showcase in New York. After a year of pounding the pavement with no results, she was certain her agency was about to drop her—until she received three offers in one day. Two of them were plays, and one was an independent film, "The Turning." Though she is now featured prominently on the movie's poster, she says her role was small. "I was the girlfriend of the lead," she says. "And I was terrible." She adds with a laugh, "Hey, I was terrible at the beginning of 'The X-Files'! I still can't watch some of that stuff." One problem was that she was playing at the age of 25 an authoritative figure who had pages of "monologues full of medical and science mumbo jumbo." She admits, "I didn't feel like anybody's authority. I still feel that way, even in 'Johnny English'! I feel like I'm 12 inside. But somewhere along the way I found at least some legs in being able to pretend."