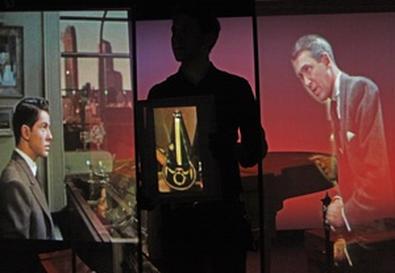 Photo Source: Paula Court
In Alfred Hitchcock's 1948 film "Rope," two college students commit the "perfect murder," which they appreciate as a "work of art," delighting in its form while remaining untouched by its substance. Based on the infamous Leopold and Loeb murders of 1924, "Rope" is a critique of aestheticism; "art for art's sake" turns up empty as a system of ethics. The murderers' mistake is restaged in "Gin & 'It'," in which "Rope" plays continuously while four technicians manipulate a series of screens to capture, with the help of a projector, Hitchcock's actors as they appear in their scenes.

What starts as a strangely riveting dance piece turns dramatic as one technician's failure to keep up causes his friends to turn on him. As we watch the image of Jimmy Stewart (Hitchcock's star) discover the boys' grisly deed, we also watch the live actors commit a practical joke that in this context feels almost as disturbing as its filmic parallel. That the weak link, poignantly portrayed by Christopher Loar, should be punished makes sense in Farrington's stage world, just as a murder might make sense in the warped elitist minds of Hitchcock's killers.

Director Reid Farrington, whose work as video designer for the Wooster Group has similarly yielded critique through homage, has here crafted an evening that both delights and warns. The virtuosity of his company—Karl Allen, Keith Foster, Tim McDonough, and Loar—as they fulfill their choreography to the millisecond is a worthy tribute to a great film director. Even better, "Gin & 'It' "revives the moral of "Rope"—often ignored in favor of the real Leopold and Loeb's homosexual relationship in later adaptations of their story—for an age that, like Farrington's technicians, often finds itself distracted by the shimmering beauty of video screens.