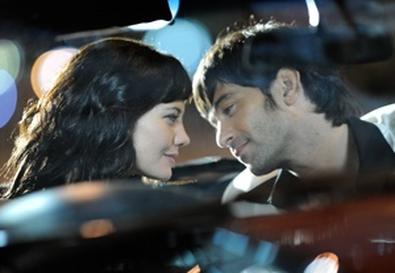 Photo Source: Liongate
My acting days are behind me, but I take those experiences and lessons into my filmmaking. I had my brief moment in the sun and made my turn to writing and producing after an accident and seven surgeries, but that’s a long story and a Lifetime movie of the week. So today, I’m going to tell you about the film I wrote and produced, “For The Love Of Money,” which stars James Caan, Paul Sorvino, Edward Furlong among others.

It’s based on a true story and is a bonafide action flick, one with guns and swearing and bad guys. A real popcorn movie. A “macho” movie, written, produced, and directed by chicks. I wish for dramas sake I could say that there was some sort of sexism from the male cast members, but frankly, it never even came up. At no time did anyone look me in the eye and say, “Hey, what’s a girl who was writing and acting in rom coms a couple years ago know about gangsters?” They had faith; they loved my script; and they respected me as the tough producer that I am. I never set out to make a “macho” film. I just knew what I wanted to see. I wanted style; I wanted bold characters; and I wanted a soundtrack that would take the audience back to the 70’s and 80’s in all of their splendor. And I got all of that, in spades.

Making movies isn’t a male or female thing; it’s a human thing. Some of the best romantic comedies, such as “Tootsie,” have been made by men, and the most macho films, like “The Hurt Locker,” by women. We all have the other side in us; we just need to tap into it. In writing the screenplay, I used my feminine and masculine side. I loved writing the scene where the star-crossed lovers meet and share a Coke, the flutters and excitement that they felt when their eyes first met. I felt it all with them. And when I wrote the scene where Mickey Levine, played by James Caan, is shouting profanities I wrote that from my gut. The fighter in me. I remember the casting directors blushing when they read the sides with actors during auditions. I think the F bomb is dropped about 48 times in the film, and not for effect, not for shock value, but because that’s how these people talk. You can’t be thinking about what’s ladylike or what will my Mom think when you’re writing or producing or even acting. You have to think viscerally and unapologetically.

The editing room is where the true magic happens. You can create virtually anything, and that’s where as a producer you have to think with both sides of the brain. The creative and the businessperson. As the businessperson, you must make a movie people can relate to. Then as a creative, you get to be bold and do things you want and hope that someone gets it. Like when in the film, Oded Fehr, Richard Gunn, and Yuda Levi are on their way to the jewelry heist. They’re singing along to an 80’s pop hit, and when the team first read it, they thought I’d gone mad. Shouldn’t they be talking about the heist? Shouldn’t things be tense? I explained it in the infamous words of John Lennon: “Life is what’s happening while you’re making other plans.” One thing I learned as an actor was to never “play” the scene. Never come in with the intension to have the fight because people don’t act that way most of the time. People creatively hide. They hide their emotions and try to avoid the confrontation. Only as actors do we try and go for the conflict because it feels like the meat and potatoes of the scene. I don’t agree with that philosophy. I love to see an actor creatively hide. Playing with the packet of sugar on the table instead of looking into a lover’s eyes. Or like Marlon Brando did in “On The Waterfront” and turn away from the camera in his grief, to not “play” the scene.

I learned this from my former acting coach Jeffrey Tambor, who I had the delight of casting in this film. That was a trip. To work with the man who had critiqued me and have him ask me what I thought of a take. It just makes you realize that in this business, anything is possible. People will tell you its impossible and that you might as well give up now. If I had listened to them I wouldn’t have accomplished any of the things that line my resume. To those people I say FU$# off, and not for effect or shock value but because they are the killers of greatness. We all have greatness in us. As Shakespeare wrote, “Be not afraid of greatness; some are born great, some achieve greatness, and others have greatness thrust upon them.” Its just about believing in your self and doing what others consider “the impossible.” Pounding the pavement, going on auditions, writing your self that plum role and just doing it. After all, somebody has to.

“For the Love of Money” opens June 8 in Los Angeles and New York, with a digital and video on demand release later this summer.

Jenna Mattison started her career in Chicago with regular TV and radio appearances. She blossomed in the theatre community playing Catherine in Arthur Miller’s “View From A Bridge.” Mattison made her move to Los Angeles and began landing roles immediately, guest starring on “Beverly Hills 90210,” “Party Of Five,” and “The Fighting Fitzgeralds.” As a writer and producer, Mattison founded Cheshire Smile Productions, bringing to life her feature film “Fish Without A Bicycle,” a festival-winning, coming-of-age comedy directed by Brian Austin Green. Mattison wrote, produced, and starred as Maggie Malone in Cheshire’s second release “The Third Wish.” Mattison next signed as writer/creator of the new “Brenda Starr Reporter.” Mattison also wrote “Committed,” which begins production this spring for a fall television debut. Mattison recently finished writing “Messiah,” the first in a series of explosive contemporary novels. She is also an active member of the Bringing Back Broadway campaign to bring about the resurgence of downtown Los Angeles’ famed theater district.