How 'Glee' Stars Used Dance to Grow Their Roles 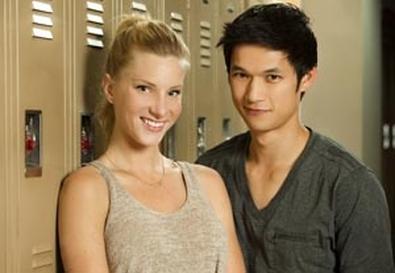 Photo Source: Blake Gardner
Heather Morris and Harry Shum Jr. share more in common than starring on the runaway TV phenomenon "Glee," now in its second season on Fox. Both were brought to the show by choreographer Zachary Woodlee, who was familiar with their work. And both have transformed relatively minor roles into major characters. For most of Season 1, Morris' dim cheerleader, Brittany, spoke very little yet pulled off great one-liners ("Did you know that dolphins are just gay sharks?"). As Mike Chang (aka "Other Asian"), Shum was virtually mute for his first year on the show. But by Season 2, the pair had developed their own followings and soon found themselves thrust into main storylines. Mike began a romance with shy Tina (Jenna Ushkowitz) and has become a beloved member of the glee club—despite the fact he can't sing. And Brittany has not only found herself the center of a love triangle between Artie (Kevin McHale) and Santana (Naya Rivera), but also got to star opposite Britney Spears in an episode aptly titled "Britney/Brittany."

Their dance backgrounds brought Morris and Shum to "Glee," so it's no surprise the pair have continually wowed audiences with their moves. Shum, who appeared in such films as "Step Up 2: The Streets" and its sequel "Step Up 3D" and the series "The Legion of Extraordinary Dancers," has recently performed show-stopping numbers on "Glee" to such songs as "Make 'Em Laugh" and "Bubble Toes" that showcase his impressive skills. Morris, who appeared in the film "Fired Up!" and was a backup dancer for Beyoncé's 2007 world tour, performed such a dead-on imitation of Spears in their episode that she was mistaken for the real thing by other cast members.

Back Stage recently visited Morris and Shum on the set of "Glee" to talk about how each was drawn to dancing, how they developed their craft, and how neither imagined dance as a career.

Back Stage: How did you first come to be interested in dancing? Heather, is it true you started taking classes at the age of 1?

Back Stage: That's still young! She didn't need to lie.

Morris: Right? I feel so confused. You know what I mean? My life has changed now; I feel like I've been lying to everyone.

Back Stage: Harry, how did you get started?

Harry Shum Jr.: I started in high school. My parents never really exposed me to dancing, or really anything in the arts, and I auditioned for the dance team on a dare. Then it became a passion of mine.

Back Stage: Did you end up receiving any kind of formal training?

Shum: I studied with Chuck Maldonado, Dave Scott, Kevin Maher, and Dante Harper. But really, it was about the power of video. I would watch videos and mimic Janet Jackson, Usher, Michael Jackson. You kind of just learn from watching people. I took classes for technical reasons, like knowing how to count; I could not count for the life of me when I first started. I was like, "Five and nine!" "No, there's no nine."

Morris: I took class with Phlex and Tovaris [Wilson] and class with J.R. Sawyer. I once took a class from Harry! He was teaching at a convention, West Coast Dance Explosion. And I think I'd already graduated and I was a freshman in college, and I went with my younger dance friends, and he was teaching. I took his hip-hop class. He had braids back then.

Back Stage: What kind of teacher was he?

Morris: He was quiet. But I thought he was so cool because I loved hip-hop and at the time I was a jazz dancer. I never really got to do hip-hop until I came out here, so taking his class was really fun for me.

Back Stage: At what point did you realize dance was turning into a career?

Morris: I actually didn't want to dance for a career. I remember being 10 years old at a convention in Colorado, and a teacher, he sat us down, and he was like, "Who of you are going to be professional dancers? Raise your hand." And I was like, "I don't want to. Their lives are crazy."

Back Stage: So why were you doing it?

Morris: It was my sport. Everybody has their sport.

Shum: It's like in high school, when you have a sport and you do it for fun.

Back Stage: So you enjoyed it, but you didn't see it as a profession.

Morris: Yeah, I loved it. I just didn't think I would make money off of it one day.

Shum: That was the same thing with me. It was weird, because I never even knew you could make money off dancing.

Morris: And what you knew of it was, like, the show "Fame"—where you're always struggling. It's horrible.

Shum: That's what I thought. I just wanted to have fun doing it. And then when I was living and going to school in San Francisco, my friend told me it was what he did. So I thought I would try it out. It worked out all right.

Back Stage: What was the audition process like for "Glee"? Did you go in more as dancers than actors?

Shum: A lot of credit goes to Zach Woodlee, for us both. It was the reason why we got on the show.

Morris: Zach Woodlee is God. He is the reason I am on the show.

Shum: We had kind of different situations. I went to audition and I read, but I didn't dance in the audition.

Morris: Zach brought him in specifically because we needed a dancer. He was auditioning anyways, so it was perfect.

Back Stage: So, Heather, did you ever formally audition?

Morris: I did not audition. I was supposed to, but because of Zach, I didn't have to. I had quit dancing in January of '09 and wanted to be an actress. Zach knew that but said he was going to bring me on to teach the cast choreography to "Single Ladies" for the show. So he brought me in to teach the dance and Ryan was like—

Morris: No! No, he was teasing me, because I was supposed to read for him, like three times, and he was just like looking me up and down.

Shum: And that can be intimidating.

Morris: I was so scared. But it wasn't a formal audition. They were just considering me, and he brought me in for that purpose, of like, "You're going to teach the kids, and then they are looking at you, maybe for this role." And like a week later my agent was like, "Yeah, you got the role of Brittany." I couldn't believe it.

Back Stage: Had the role already been written?

Morris: They had the idea that they wanted a cheerleader. They wanted her to be black, and then they—

Back Stage: Harry, what about you, was your character written for you?

Shum: No, I actually read Finn's sides. I didn't hear anything for a week, and then they called me to come do the "Single Ladies" dance. That was my first episode, and after that I was like, "All right, that was fun." I didn't know if I'd be back. But after a couple days, they said, "Come to rehearsal." And it started gradually happening where they would say, "We need you for another episode." And then from there, they kept calling, and I kept coming back.

Back Stage: Both of you started out as smaller characters; at what point did you realize they were writing more and more for you?

Morris: I think it was the more they got to know us. We weren't there for lead roles; we were there to fill the space. But as we built relationships with others and people got to know us, it started increasing.

Shum: For the longest time, I was mute. The first season, I had nothing. I had, like, three lines, and I was happy to get those. Luckily, the second season started to build more into the characters and allowed us to have the spotlight more. Heather got to do a lot of amazing things—like the "Britney/Brittany" episode was basically hers. She got to have an amazing storyline.

Back Stage: Did they tell you, going into the second season, that your roles would be increased?

Shum: No. I didn't know. I think it was on the tour is when it really kind of took off. For me, going into it, I just didn't know that there was a fan base for Mike Chang. And the tour was when you see it firsthand; you see how people are responding to you. And that's when things kind of turned around.

Morris: Yeah, Ryan had no idea. And then Harry came on stage, and people were screaming, "Mike!" They were freaking out. It was the same for my character; we had no idea.

Back Stage: So you think the tour helped?

Morris: I think it helped the writers to see the response, because they traveled with us.

Back Stage: What's been the most intimidating or difficult performance you've done on the show?

Shum: "Make 'Em Laugh" was scary, so scary. Matt [Morrison] and I had to learn to do the flips because we don't flip. And you're following in the footsteps of Donald O'Connor, who was perfect. I heard he was on bed rest for three or four days after he did the number. Nothing could come close to what he did, but I was so honored to be able to pay homage the way we did.

Morris: I was intimidated by the Britney Spears episode for sure, because she was there—

Shum: That's even crazier, that she was there. And Heather did an incredible job. I remember Kevin [McHale] and I walking in and thinking Britney was actually dancing. Then saying, "Oh, my God, it's Heather!"

Back Stage: Do you think anyone can be taught to dance, or do you have to have a natural aptitude for it?

Shum: I mean, you can teach them how to kind of move, but certain things you kind of can't teach. You either have it or you don't. But simple moves, here and there, you can. Especially on this show, you know, a lot of them weren't dancers at all. They've gotten a lot better.

Morris: One example is Cory [Monteith, who plays Finn]. I came in to teach Cory, and he struggled, but he tried really, really hard. And I think, two years later, he's gotten so much better.

Back Stage: How do you protect your bodies physically? Do you find yourselves getting hurt frequently?

Shum: Not really. You have a couple bruises, but it's not that bad. Matt broke his finger and didn't even know. He was a trouper and kept going, and the next day he had a splint.

Morris: When you're a dancer, you just keep going. When you fall, people around us are like, "Are you okay? Do you need a medic?" And I'm like, "I'm fine, just let me do what I want to do." And keep going.

Shum: We're kind of built to get hurt a bit.

- Wrote, directed, and starred in the short film "The Elevator"

- Co-wrote and starred in the viral video "Nuthin' but a Glee Thang," a parody of the rap by Dr. Dre and Snoop Dogg

- Other film appearances include "Stomp the Yard" and "You Got Served"

- Was one of the dancing silhouettes for the iPod commercials