Glenn Close on the Secret to Career Longevity 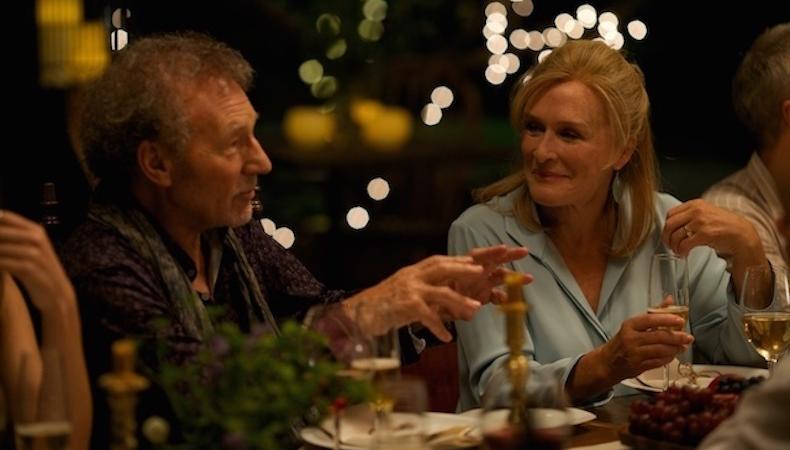 Hollywood royalty doesn’t get much more elite than six-time Oscar nominee (and three-time Tony and Emmy winner) Glenn Close, which is part of what makes her latest feature film, “The Wilde Wedding,” so much fun. In this romantic comedy for women and men of a certain age, Close let’s her hair down as the now-retired film star Eve Wilde, who in preparation for her fourth marriage (this time to Patrick Stewart’s Harold Alcott, a writer), invites her extended family to her upstate New York home. Among that family is the father of her children, first husband and fellow actor Laurence Darling (John Malkovich). As anyone could guess, the guest list is about all that goes to plan here, and tensions—sexual and otherwise—run high as the quaint nuptials unravel into a weekend romp.

Backstage recently caught up with Close to discuss mining her own life as a longtime performer to play Eve, what she wants younger actors to learn from her audition mistakes, and the proposed film adaptation of “Sunset Boulevard,” for which she’s eager to reclaim her star as Norma Desmond.

What has playing Eve Wilde added to your acting skills?One of the things that I liked about it was that it’s a romantic comedy for my generation, which don’t come along very often. And yet, just because you get older doesn’t mean you lose any sense of romanticism or sensuality. So I liked that part of it a lot. And I thought it was a really well-written script. I thought it was very human and funny and lots of people can relate to it, as far as dealing with their families. And the fact that I could get back with John [Malkovich] and with Patrick [Stewart], who I’ve done very, very different things with...it was kind of a no-brainer for me.

Eve is an actor in the film, as is Malkovich’s Laurence. Were you drawing from your own perspective as a longtime working actor in bringing this character to life? Well, yeah! You know, it’s nothing you have to really concentrate that much on because it’s just all there.... I call myself an actress, because I don’t know why all of a sudden women were being called “actors.” It seemed weird to me. It’s, like, it’s almost as if “actress” is meant to be lesser than “actor.” So I am an actress—I am not an actor. I am a female actress.

We’ll certainly be sure to make that distinction going forward. So when you were an early career actress, how is it that you first got your Equity card? Is there a story there?I was a 22-year-old freshman at [College of] William & Mary, and I chose William & Mary because it was a rigorous college and I wanted to get a good liberal arts education, but it also had a very, very strong theater department, and I benefitted from that. First semester my freshman year I walked into the theater and auditioned for “Twelfth Night” and got the part of Olivia. For four years, for me, that was my training. I had a wonderful mentor in the man who was the head of the theater department at the time, and I liked the fact that it wasn’t so precious. You had kids from chemistry and philosophy and English all coming over to take part in these things. I got some real training there. I did summer theater in an outdoor amphitheater with no amplification, so I had to learn how to lower [and] get a range in my speaking voice, not just my singing voice. Things like that. And then my senior year, I applied for URTA [University Resident Theatre Association] and TCG [Theatre Communications Group]; they had regional and then national auditions, and it was through the TCG auditions that I got my first job with the Phoenix Theatre Company in New York and started my career onstage in 1974. And because I was hired by them, I automatically got an Equity card. So that was how I began.

What advice do you have for actors who want a lasting career on the stage and screen? I would say learn your craft in the theater if you possibly can, because that will sustain you. And you have to learn your craft personally because you don’t have a director or an editor honing your performance for you. I also think it’s very important to choose things. Well, at the beginning, you basically want any job, but when you’re able, to choose things for very subjective reasons and not ever for, you know, “This will get me an award,” or, “I’m going to make tons of money out of this.” Of course, the money can come into consideration, but build your own set of criteria of what you think will help you grow as an artist be fearless in those choices.

Looking back, is that something that you learned over time, or is that always how you’ve navigated your career?I think I’m very instinctual, so I think, yes, it’s part of my DNA to have strong feelings about what I read and how I react to it.

I’m sure you don’t find yourself in the audition room much anymore, but from those early years, do you have an audition horror story to share with us?I have a lot of them. [Laughs]. Oh my god, I was so bad at auditioning.

How would you typically prepare for an audition?Now it’s so different because people make tapes and people are expected to memorize lines in auditions, which I think is nuts because then a good 30 percent of you is trying to remember what the lines are instead of trying to get the meaning or the nuances from the scene.

[But] what I used to do is I’d work on something and I’d get myself at this pitch, on this razor edge of energy and concentration—which is fine if I could hold that till the time I would walk in the room and perform. And if I could hold that, I more often than not got the part. But the horrible times were when you couldn’t and you felt it sort of draining out your fingertips, and you go into the room and because you were relying on an emotional state, it’s hard to drum it back up. So that’s not the way to go.

I think the way to go is to take your time and breathe and listen and let people know that there’s a thought process behind what you’re doing. If something distracts you, acknowledge it. Somehow get yourself out of that kind of window of just attention and focus and energy that is not very flexible. If you go in with the idea that, I’ll just throw out some ideas, I’m not gonna give a definitive performance, but I’m gonna be loose and I’m gonna throw out some ideas, I think that’s a much healthier way to go into an audition.

News recently broke that you’ll be revisiting Norma Desmond of “Sunset Boulevard” for the big screen. What keeps you coming back to her now a third time?Well, that’s not an absolutely done deal yet, so that got out a little prematurely. Hopefully it’s going to happen, and hopefully we’ll hear about whether it’s a go in the next couple of weeks. [As to] why I’m interested in that, it’s a part that’s really, really in my bones now, and the challenge of translating it for film would be really fun. I mean, it would be very, very challenging to see if you could create ultimately the same impact on film as we did in the theater. And that, to me, is just a great exploration and it would be a totally new experience.

Want to act in a romantic comedy like Close? Check out Backstage’s film audition listings!

Benjamin Lindsay
Benjamin Lindsay is managing editor at Backstage, where if you’re reading it in our magazine, he’s written or edited it first. He’s also producer and host of a number of our digital interview series, including our inaugural on-camera segment, Backstage Live.
END_OF_DOCUMENT_TOKEN_TO_BE_REPLACED