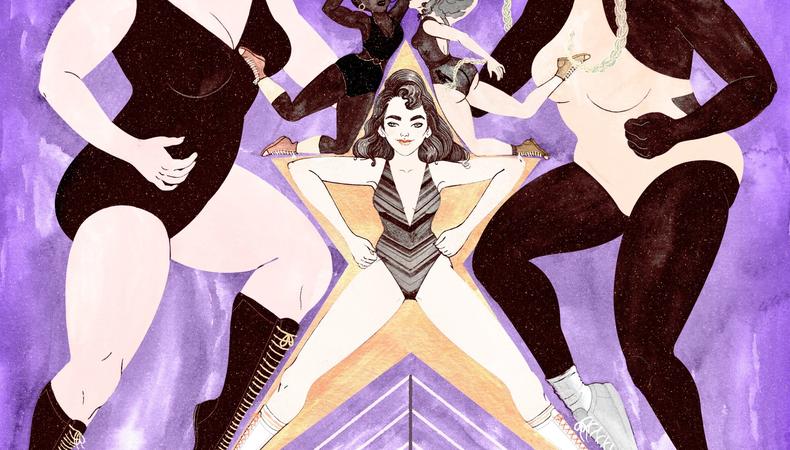 Jennifer Euston helped change the TV landscape when “Orange Is the New Black” debuted one of the freshest-looking casts on television in 2013. In the years since, TV has changed a lot, including Netflix’s profile as a content producer. But one thing remains the same: Euston, a three-time Emmy winner, continues to break the mold with diverse and unexpected ensembles, most recently fellow Netflix projects “Unbreakable Kimmy Schmidt” and “GLOW.” All three streaming series return this summer; “Unbreakable Kimmy Schmidt” Season 4 returned May 30, “GLOW” Season 2 streams in full June 29, and “Orange Is the New Black” drops July 27.

What was the casting process like for “GLOW”?
It was fast and furious. Everybody had to audition. It wasn’t offer-only for anyone because they had to be able to act, and I had to assess their athletic ability in the audition room. We knew the girls were going to be doing a lot of their own work, so I had to be sure that I wasn’t sending somebody who never exercised into this world. I had them do something physical in the room, like a kick, to show they could move. I also was looking for a really diverse group of women—different ages, body types, and ethnicities. It was going to be this amazing menagerie of women.

How was that process different from other projects you’ve worked on?
There weren’t really character descriptions in the script, and the process wasn’t casting as usual. I brought in actors who are interesting, have amazing technique, and have comedy chops. And I read them for parts I knew they weren’t right for. As we formed this world, we assigned actors kind of based on the characters they didn’t fit into when they read. I needed actors who had technique but were also inventive and a little off. It was a lot of looking, digging, and figuring out who belongs in that world. We had actors we loved for a long time, but we had to figure out where they could go. You can only do that with actors who are really gifted and can really take a role and make it their own.

What do you look for in a comedic actor?
I don’t think you can quantify funny. It’s a crapshoot; you have to have the material and see if they make it funny. There are so many different types of humor that I just have to match the right sense of humor a person has to the right role. For “GLOW,” I had to distribute comedy over it in different ways. It’s such an unusual plot and story, you need humor to tell it, and the humor humanizes the characters so audiences relate to them. It’s very hard to describe casting comedy. What I look for is if I laugh in the room. I know they’re funny when I’m reading them. It is as basic as that.

How does diversity play a role in how you cast?
It’s how I see the world and the canvas when I’m casting. With Jenji Kohan, it’s always really organic. The other thing to understand with casting “GLOW” was the origin. These were all actresses who weren’t getting work. I wasn’t looking for contemporary women wrestlers who have a whole different kind of body type. These were supposed to be regular-looking actresses who couldn’t really hack it in Hollywood because they were different in some way. Plus, I always just want all different faces, shapes, sizes, and ages—everything that I can get into a frame.

How do you know an ensemble is going to work?
You just hope and pray that they’re all good together. There is no magic formula for an ensemble. We did chemistry reads for leads, but that was only a couple of people. Everybody else, you just trusted in the fact that they’re all professionals and they all sort of have similar backgrounds in terms of the caliber [of work] and what they’ve gone through acting-wise and life-wise. I just hope they all support each other and get along. They all support each other and take care of each other. On “GLOW,” they had to get so close so fast. They had people in choke holds and had their legs around somebody’s head. It’s a very intimate thing to learn that kind of choreography, wrestling, in this case. It bonds them.

How is casting for a Netflix show different from cable or network?
It’s the best. I feel so lucky that I got that call for “Orange.” When I cast that, I was still getting DVDs in the mail from Netflix, so I had no idea what I was doing. I thought I was casting a web series. “House of Cards” hadn’t come out or anything, so there was nothing when I was casting to show as an example. It was very challenging because I had to convince people to come in because nobody knew what Netflix was. I believed in Jenji and I believed in the work, and I thought, Well, it can’t hurt. What’s the worst that can happen? This is a web series that nobody sees or whatever. You just kind of go for it. Netflix couldn’t have been more supportive. They didn’t interfere in our creative process, which is the most important thing and the best thing about Netflix. It’s just a straight line from creator to Netflix, there’s nothing to block who we want. They trust the filmmaker, and that is crucial in making anything good. So that’s what Netflix does: They really trust their filmmakers, and I think that’s very evident in their filmmaking and the shows that come out of that, how different the shows are, and how great the shows are.

How was your experience different with “GLOW” now that Netflix has established itself?
It definitely was great because it has Jenji’s name; people want to work with her and do her things. She makes great programming, but it’s a low-budget show and the physicality of it, I think, was intimidating to some people. Some people weren’t able to do it because of past injuries or some other situation that they wouldn’t be in the right physical shape to do it. I was casting out of Los Angeles, and it’s easier for me to find great unique actors in New York because that’s what we breed in New York. In L.A., not as much. There is an infinite number of actors in L.A., which makes the process harder than it is in New York. I had to start from scratch, do a lot of pre-reads. In some ways, having Jenji as a calling card is definitely helpful, but the actors I was looking for, I didn’t have to pull it that much because we weren’t casting on purpose, we wanted to cast people who aren’t super well known. I wanted to cast it realistically.

Elyse Roth
Elyse is a senior editor at Backstage, where she oversees all casting news and features content, including her weekly casting director Q&A series, In the Room. She came to New York from Ohio by way of Northwestern University, where she studied journalism, and now lives in Brooklyn. She might see and write about awards-worthy films, but Elyse still thinks “Legally Blonde” is a perfect movie and on any given night is probably taking in some kind of entertainment, whether it’s comedy, theater, ballet, or figuring out what show to binge next.
END_OF_DOCUMENT_TOKEN_TO_BE_REPLACED