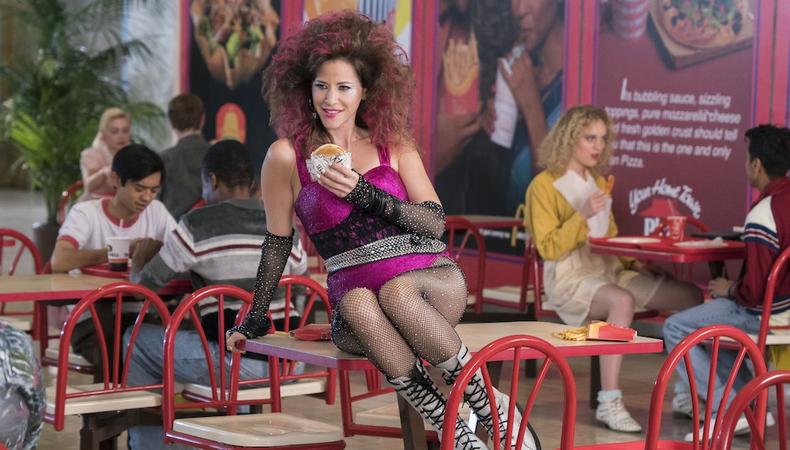 For two seasons strong, Jackie Tohn has co-starred in one of Netflix’s most entertaining and acclaimed ensembles as one of the gorgeous ladies of wrestling on “Glow.” (The Liz Flahive and Carly Mensch-created series just nabbed four Emmy nominations this year, including best comedy series.) As party girl Melrose, she’s taken what could have otherwise been a one-trick pony and turned her into a scene-stealing fan-favorite. Tohn recently spoke with Backstage about how nailing the the series’ tone is a matter of living by a “less is more” mantra and the importance of making your own material as an aspiring actor.

What has playing Melrose added to your acting skills over the last two seasons of “Glow”?
Oh, I love that question. I've never gotten that question. Playing Melrose has added quite a few tools to my tool box. It’s harder to play a character that's similar to you than you think because as an actor, you're trying to in a weird way perform without performing. You just need to show up and “do” and be present. And with Melrose, that's really all you can do because she's so funny and she's so biting that I have to remind myself in a weird way not to try. If I show up and I try and do schtick, if I make her edgy or make her funny, that doesn't track. I'm noticing that with her, less is more and I think that that's a good note for me in my whole life: that less is more. I don't have to really put on too much to be her. I can sort of just show up and do the work and be a lot more subtle with her.

What about Melrose especially interested you as an actor? Was this the character that you auditioned for?
The process was actually pretty incredible, [and it’s] such a Backstage story. So I had tried out, I had just played Gilda Radner right before “Glow” for this movie called “A Futile and Stupid Gesture.” I met Allison Jones, one of the queens of casting in Los Angeles—casts everything, she's revered because of her eye, but also her patience and how amazing she is with actors. Her protégé who she brought up in casting is Jen Euston, who cast “Glow.” So Allison Jones sent Jen Euston my Gilda tape and was like, “Hey, you should know about this girl.” There is truly nothing that's ever made an actor feel better than Allison Jones fighting for you. Then I went in for “Glow” and all the characters weren't completely fleshed out, so I initially went in for Ruth, and I just kept going back in for Ruth. And then I read Jenny the cheerleader, and then there was this party girl character that I definitely did something different with. I sort of made her more like me and edgy and dirty and [she] does coke and swears and all that kind of stuff. I didn't play her [as a] Paris Hilton party girl.

Does it feel especially significant to be making this series today? Season 2 in part tackles the “casting couch,” and just generally, you’re all kind of dealing with toxic masculinity in one way or another.
It certainly does. It's so incredible to be part of a show that I think matters and is making a difference. “Glow” would be existing right now with or without what's going on. Like, thank goodness everybody's waking up and we're demanding equal pay for equal work. And we're acknowledging toxic masculinity and we're acknowledging the casting couch and thank god we're doing all of that. I think “Glow” is adding dialogue to a very long-overdue conversation, and it just so happens [to be] coming up at the exact same time. The timing is perfect. These women were working on this show and trying to get it sold before all of these conversations were happening. So the fact that it all came to a head at the same point is magical and necessary.

Do you have a history at all with Backstage?
I was a Backstage reader." I had a great agent as a kid, so I didn't personally need to read Backstage as much because I had an agent, but that was always something that she was reading, and the other kid actors who were like, “Oh, did you see that in Backstage?” And then I tried out for “Gypsy,” the TV movie that Bette Midler did. That call was only in Backstage, and there was a ton of weird, random, and wonderful opportunities that absolutely came from Backstage. In fact, when I got this guest star role on “The Nanny,” my agent took out an ad in Backstage.

What advice would you give your younger self when you were just starting out?
The first piece of advice is if this is your skill set and this is your passion, just do it. You may have to have another job along the way, but if this is your passion and this is your creative outlet and what you need to do to express yourself—if it feels like you need to do it on a grand scale, and that feels true. My [second piece of] advice is “make stuff,” because I was an actor and waiting for the phone to ring, and it doesn’t ring because you have nothing to point anybody to. Then when I started to do a lot more standup or touring, then I could have videos or make content with my friends, or write a sketch and put it online with my friends. Then at least if you're looking for an agent and a manager, you can point people to something. Everybody's got their own life. It's not anybody's problem to help you, but if you make something undeniable that's funny enough that you just shoot on your iPhone and put it online, even if it doesn't go viral, even if it doesn't get a lot of hits, you have a piece of content that you can send to someone and go, “This is who I am. This is what I look like. This is my sense of humor. I wrote this, I directed it. It cost me nothing, and now it sits on YouTube.” At least you have something to point people to. We're all charismatic and funny and talented. You got to do something with yourself. Then, people can see you and you're out there enough and then people will think of you for other things. When I started doing standup more, I felt so much better about myself and what I was putting out into the universe and my creativity, and I was getting that validation fix from just doing little comedy shows here and there. Then when I go in and audition you can tell Kathy, “Hey, come and see me at the Comedy Store on Friday.” You can point people to these other things you're doing instead of sitting home and going like, “Can someone help me?” I don't walk into an audition and go, “Oh my god, this is the end-all, be-all, because if I don’t get this job, it's over for me.”

How do you typically prepare for an audition?
It depends. Auditions are so hard. It's a very, very challenging situation to succeed in, and this sounds darker than I mean it, but it's sort of a setup for failure. You show up. You have a vague idea of what they're looking for, but you try and make something your own, you try and make something fun, and there are various versions of you in the waiting room, and then you go in and then you walk in the door and Jenji Kohan is sitting there and your brain just goes, “Oh my god, I've wanted this my entire life. This could change my life. This moment.” How do your hands not shake? How do your palms not sweat? How does your voice come out as calm and chill and confident as you'd like for it to, as it did when you were in your living room? Not that there's no way to prepare; you gotta do the work. Be as off book as you're comfortable being.

Are there any skills that you can add to your résumé after having worked on “Glow”?
Sidebar, emotional answer: “Glow”hasallowed me to lift the limitations I put on myself for 25 years of my life. I told myself I wasn't an athlete. Like, there wasn't an athletic thing in my “special skills,” [which were] singing, dancing, accents, improv comedy. It used to be all my special skills were performance-based. I remember even like checking off stuff on like one of the casting websites back in the day and and literally not checking anything athletic off. And now with “Glow,” of course I would put wrestling…. What if all my special skill is just: believes in herself? Yeah. Special skills: a rise in self-esteem and empowerment and her ability to be a badass lady warrior. Also: can do a mean New England accent.

Benjamin Lindsay
Benjamin Lindsay is managing editor at Backstage, where if you’re reading it in our magazine, he’s written or edited it first. He’s also producer and host of a number of our digital interview series, including our inaugural on-camera segment, Backstage Live.
END_OF_DOCUMENT_TOKEN_TO_BE_REPLACED