Gob Squad's Kitchen (You've Never Had It So Good) 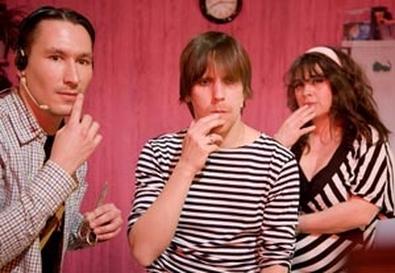 The British-German troupe Gob Squad has a way with its public—quite literally. Earlier this month, in its production of "Super Night Shot," the company waged a "War on Anonymity," taking to the streets of New York and roping strangers into a movie that it then presented onstage at the Public Theater. The group has returned with "Gob Squad's Kitchen (You've Never Had It So Good)," an inventive but ultimately wearisome tribute to Andy Warhol and his movies celebrating the commonplace, particularly "Kitchen." Once again Gob Squad is drawing theatergoers into the action and video.

There's little doubt that the company has perfected its use of technology. Audiences get a glimpse of what goes into making the show as they file through the backstage environs—the group's "studio"—before taking their seats. Cameras abound in three separate areas, including a makeshift bedroom and the titular kitchen. When audience members finally enter the theater, they find a panel of three screens stretching across the stage.

Once the nearly two-hour, intermissionless piece begins, Gob Squad's backstage work bursts onto the screens (the impeccable video design is by Miles Chalcraft). On the center one Simon Will and Nina Tecklenburg launch into the show, introducing "Kitchen." On another Sharon Smith dozes in the bed in a tribute to Warhol's "Sleep," and on the third Sarah Thom, looking like a 1960s housewife gone downtown glam, sits nearly motionless as the company toasts Warhol's "Screentest" series.

When things become heated (no pun intended) in the kitchen, Smith and Thom move from their respective spots into the central action, and before long Thom comes into the house to find an audience member who will substitute for her in her film. The same happens for the other roles. These participants then find their way in the action via cues that the actors give them, either from offstage while unseen or through headsets via microphones while sitting in the theater.

There's little doubt that the four indefatigable performers possess exceptional skills in improvisation as they work with their newly found cast mates, and in some instances the results can amuse. Smith's stand-in proved to be rather intractable during an exchange he shared with her in bed, eliciting some chuckles. And the audience participant who recited the lines he was being fed from Will had a deer-in-the-headlights glaze in his eyes that definitely endeared.

But the novelty of this sort of performance only goes so far, particularly in the absence of a solid dramatic arc. With "Super Night Shot," a time limit of an hour and a "mission" (albeit flimsy) were the ingredients that helped propel a movie into the realm of a rollicking, seemingly live-action theater piece. In "Gob Squad's Kitchen," however, there is no discernible through-line, and patience wears thin with the work's inactivity and inane behavior. In Warhol's films, such things are meant to document the dawning of a new era in post-Eisenhower America. At the remove of more than 40 years, however, what had been cutting edge seems sadly old hat, despite the newfangled approach.