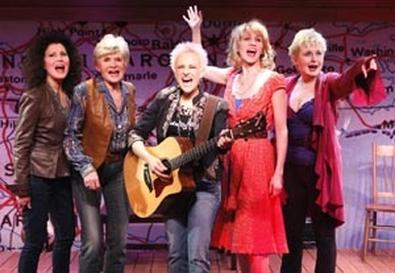 Photo Source: Carol Rosegg
Hair, styled not quite as high and wide as before but still preferably bright blond, is the signature image of the quintet of Dixie divas in "Good Ol' Girls." They are post-feminist, post-redneck, and even post–steel magnolia. These women of the New South, portrayed here with exceptional believability and spirit, may be subject to more outside influences and America's social evolution and working (as often as not without a man's help) on a wider palette, but fortunately they have retained their gifts for uniquely Southern poetic expression and their diverse ways with down-home music.

The 14 songs (plus two full reprises) in a variety of styles, by Matraca Berg and Marshall Chapman, perfectly complement the 90-minute adaptation by Paul Ferguson of stories of non-belles by Lee Smith and Jill McCorkle. Although the principals are all modern women, they provide just enough visual and vocal references to their mothers and grandmothers to underline how far they've come. Although the story is seemingly set in southern North Carolina and northern South Carolina—a colorful, detailed scrim map of that area constitutes designer Timothy R. Mackabee's set—the themes are universal, even above the Mason-Dixon Line. Berg and Chapman's lovely mountain folk tune "Appalachian Rain," for example, might only emerge from that region, but it speaks to us all.

The cast could hardly be better and is evenly matched in performance time as well as talent. There are few solos, many worthy group numbers, and no head diva here, which in itself is another metaphor for contemporary Southern womanhood. Lauren Kennedy, Sally Mayes, Teri Ralston, Gina Stewart, and Liza Vann are first-rate singers and actors and are beautifully contrasted and matched in their various numbers. The four-piece country band, headed by keyboardist Karen Dryer and including Ralph Agresta (on guitar), Tom Bradford (percussion), and Kelly Lambert (keyboard), plays as tight as they come. Unfortunately, due to a wide, shallow stage, the musicians are too often hidden behind that horizontal map instead of out front, where they deserve to be. Director Randal Myler again demonstrates his unique aplomb in melding worthwhile music with the lives of real (or at least realistic) people on stage.

Yet even Myler is somewhat inhibited by one serious drawback, not in the production but in the venue: a low-ceilinged space as charmless as its name, much wider than it is deep, with limited audience space and awkward, confusing traffic flow. The Black Box Theatre is perhaps the least satisfactory purpose-built performance space in a modern building in the city. These great and not-so-old girls, their outstanding collaborators, and a much larger pool of potential patrons all deserve to spread out in a better and bigger theater—and soon.