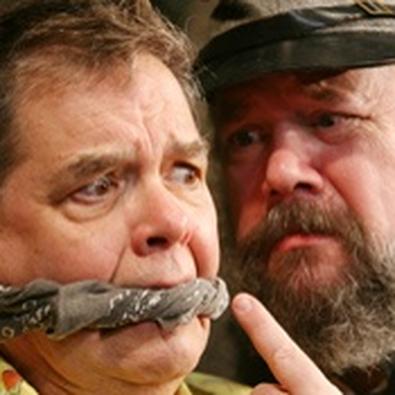 Give this to John Ahlin: His play has a great premise. Gray Area follows the adventures of three Civil War re-enactors -- in both an unnamed state and an unsettled state -- who kidnap a snotty New York-based theatre critic and drag him off to Dixie in order to teach him the error of his bumpkin-bashing ways. Ahlin writes and stars in this Civil War-centric piece, and he's clearly in love with his subject matter. Aaron Goodwin and Taylor Ruckle play Horse and Randall, dimwitted sidekicks to Ahlin's Keith, but all three men seem more closely observed than Farregut, the haughty snark whose offhand jibe about what they do causes all the commotion. Ahlin uses the outlandish premise to set up a debate between the Ivy League Farregut and the self-educated Keith, smart guys who represent the ideologies of the North and the South.

Ahlin's strange premise gives his play some strange problems: For one thing, Gray Area would work much better at a theatre in the South (yes, they have theatres in the South; I've seen some wonderful shows there). For New Yorkers, the idea that the Civil War was not about slavery but instead about states' rights probably smacks of either low comedy or racism or both, and Ahlin intends neither. Underneath the wordplay -- much of which is both excellent and undercut by his characters' laborious explanations thereof -- there's a real wound festering that Ahlin wants to expose and heal.

The play's first act is loads of fun, starting with Farregut (an excellent Keith Jochim) delivering a radio review that's certainly funnier than anything I've ever written. But by the second act, we're not sure that Ahlin knows how his characters are going to get out of their predicament, and the ending feels a little, well, made up. As farce, most of Gray Area works well; as history and balanced argument, however, it's less successful.

Presented by and at the Barrow Group,