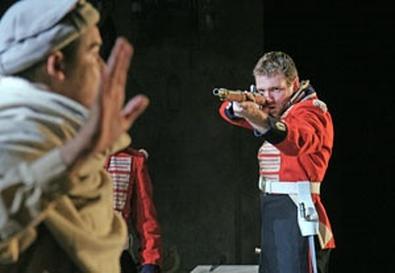 Photo Source: John Haynes
On paper, "The Great Game: Afghanistan" sounds about as enticing as the prospect of a long day of homework. Seven hours in length, it consists of 12 one-act plays by as many writers, broken into three programs and interspersed with seven shorter pieces, all tracing the history of Afghanistan and the West's involvement with it across the last 168 years. You can see it on successive nights, or on weekends in a daylong marathon with two meal breaks. A critic needs to approach every show with an open and eager mind, but I confess to being unable to shake a sense of dread at having to review it. After the last nine years, I'm pretty Afghanistanned out. So it's with great relief that I can report that I had one helluva good time. Epic in scope yet intimate in characterization, the show is smart, absorbing, and deeply affecting. It's also easy to follow and full of impressively versatile acting. For anyone with an interest in history and political drama, it's a no-brainer. Don't miss it.

Commissioned by co-director Nicolas Kent for London's Tricycle Theatre, of which he is the artistic director, "Game" begins with Stephen Jeffreys' "Bugles at the Gates of Jalalabad." In the winter of 1842, four British soldiers blow bugles outside the gates of Kabul to tell any straggling survivors of a massacre of 16,000 British soldiers and civilians that it's safe to enter the city. It ends in 2010 with Simon Stephens' "Canopy of Stars," about a young British soldier who signs up for repeated tours of duty in Afghanistan due to his commitment to "drawing a line" at the brutality of the Taliban, at the expense of his relationships with his wife and son. In between we see, among other things, the almost comical negotiation that results in the creation of Afghanistan as a nation, the forced flight of an enlightened ruler who has brought reform too quickly, the Soviets' ill-starred attempts to "help" the country, the post-Soviet descent into anarchy that leads to the rise of the Taliban, and America's fumbling efforts at nation-building. The panoply of characters includes everyone from important historical personages to average soldiers and civilians to contemporary players such as Hillary Clinton and Gen. Stanley McChrystal. Though the plays are all by Western writers (only Siba Shakib, who wrote the shorter monologues and dialogues that are peppered in between the one-acts, is from Afghanistan), they have done their homework well, ably presenting Afghanistan's society and citizens with depth and complexity. Refreshingly, though a wide range of political perspectives is presented, we aren't proselytized for any particular one. It's left up to us what to make of the whole bloody business.

The show has been touring the States with its original 14-member English company, and it's a superb one. Virtually every member gets a chance to shine repeatedly, and the actors are particularly acute with the mélange of accents required. Among the most memorable are Raad Rawi, as the emir of Afghanistan, and Michael Cochrane, as Britain's foreign minister, as the characters spar over the drawing of borders in 1893; Jemma Redgrave, as a writer who "imagines" herself into the house arrest of a deposed Soviet-backed ruler; Vincent Ebrahim and Shereen Martineau, as that fleeing enlightened king and his furious queen; and the redoubtable Tom McKay, as a quietly intimidating CIA agent, a hot-headed British aid worker, and that committed British soldier, among other roles.

Kent and Indhu Rubasingham split directing duties and keep the show moving swiftly and confidently forward. Pamela Howard's simple unit set, clearly designed for touring, nevertheless manages a terrific coup de théâtre in Part 3 involving projections on the back wall and a field of poppies. Special mention should go to Tom Lishman's invaluable sound design, which communicates everything from the subtle rushing of the wind to the deafening sounds (and vibrations) of contemporary warfare.

If the time commitment is too much of a burden, you can go see an individual program to get a taste of this unique work. But it's the sweep and scope that make "The Great Game: Afghanistan" special. The show will haunt you long after the final curtain comes down.