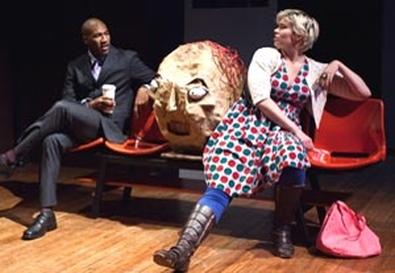 Photo Source: Ryan Jensen
In terms of volume, "The Great Recession" is certainly a bargain. Sporting six one-act plays and a cast of more than 50, this program presented by the Flea Theater offers plenty to chew on, though some of the fare is definitely fast food. Played with great energy and specificity by the Bats, the Flea's resident company of young actors, the six plays are fast and furious snapshots of the effects of the world economic downturn. Some are funny and touching; a few are screeds of horror with all the subtlety of a sledgehammer.

In the latter category are Adam Rapp's "Classic Kitchen Timer" and Sheila Callaghan's "Recess." Rapp's piece is the first play of the evening and sets a grim tone. We are greeted by a host in white clown makeup for what appears to be a game show. The contestant is a laid-off meat cutter with a chronic disease and no insurance. She's willing to commit a heinous act for $25,000, but there's a catch involving the audience. This is a strident political cartoon, with robotic figures in jumpsuits shouting slogans and complex issues made simple. Rapp's direction is equally heavy-handed. Fortunately, Sarah Ellen Stephens as the contestant and Robert Grant as a challenger give their roles a believable and agonizing desperation.

Callaghan's "Recess" depicts a post-crash future in which a roomful of starving 20-somethings distract themselves with sex, violence, exercise, and pop tunes of the 1980s as they struggle to survive on tofu. Apart from a haunting final tableau—nicely staged by director Kip Fagan—"Recess" has little impact, as there are so many figures on stage that we can barely keep track of them, let alone care about them.

Itamar Moses' "Fucked" wisely tightens the focus to two. Cindy and Reed reach a crossroads in their relationship as they deal with who's paying for what and the difference between making love and making out. Actors Jessica Pohly and Dorien Makhloghi give this short, insightful scene plenty of passion and subtext. Erin Courtney's "Severed" attempts the same kind of brief glimpse into contemporary lives and connections, but it fails to tell us much about its characters, a cross section of underemployed young people participating in a documentary on the recession. Ronald Washington and Amy Jackson offer sparks of humor and unspoken backstory as an entrepreneur and a preschool worker who meet cute.

Thomas Bradshaw's "New York Living" is an extended "Saturday Night Live" sketch about sexual harassment and theatrical pretension that is kinda funny if somewhat silly in both the writing and acting, but it doesn't aspire to anything higher. The evening closes with Will Eno's "Unum," another large-cast piece, which follows a single dollar bill from the printing plant to a street flower vendor to a manager of toxic mortgages. Deftly directed by Jim Simpson, the Flea's artistic director, "Unum" combines social commentary with convincing portraiture. Eno makes his points and shows us real, suffering people. Wilton Yeung as a cash-strapped new father and Katherine Folk-Sullivan as the equally down-at-the-heels flower seller are particularly moving. They are just two of the many Bats who spread their wings and soar in this mixed collection of premieres.