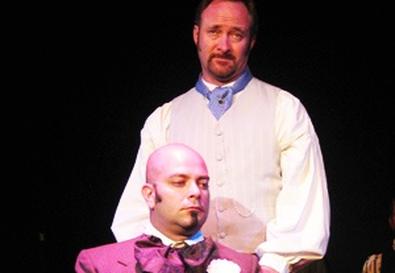 Who knew that tabloid sensationalism had roots dating back to 1895? The difference is that the subjects back then had a much more substantial and lasting influence on art and culture than Paris, Britney, and the collective efforts of their publicists. Playwright Moisés Kaufman's gripping and powerful script delivers—from what easily could have been another trite, riches-to-rags story—a fascinating and energetic ride through the tumultuous and sometimes humorous trials of the Victorian era's most well-known literary superstar.

Oscar Wilde (Kerr Seth Lordygan), while considered the greatest playwright and humorist of 19th-century London, faced three court trials stemming from a relationship with the handsome and much younger Lord Alfred Douglas (Joshua Grant), which led to his being charged with criminal acts of homosexuality. Enraged by his son's affair with Wilde, Douglas' father, the Marquess of Queensbury (Andrew Hagan), sends out a slanderous note, publicly accusing Wilde of being a sodomite, as an attempt to stop the relationship. Wilde reacts by pressing libel charges against Queensbury, and so begins the first trial. The next two trials target Wilde, born out of statements he made in the first trial that gave the authorities reason to believe he engages in the illegal act of sodomy. Ultimately, Wilde is convicted of and imprisoned for "committing acts of gross indecency with other male persons."

Drawing on real-life trial transcripts and Wilde's words, director Susan Lee offers a fresh take on this legendary fall from grace, providing a nice look at the eternal battle between art and morality while emphasizing the way the powers-that-be try to exercise control over people's private lives. The nine-member cast turns in respectable and impassioned performances, giving a reminder that, though times and circumstances may have changed, human emotional reactions remain the same.

"Gross Indecency" makes one wonder how the artist who wrote "The Importance of Being Earnest" could ever have been treated this way. It's not like he grabbed a microphone out of a 19-year-old girl's hand during her award acceptance speech.