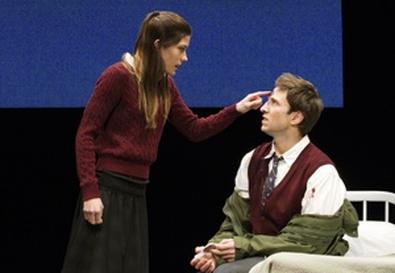 Photo Source: Joan Marcus
You don't want Kayleen or Doug, the mismatched almost-lovers in Rajiv Joseph's two-hander "Gruesome Playground Injuries," at the wheel of your carpool. Both are accident-prone and liable to wind up in a ditch. That's exactly what happens to Kayleen just before the second of eight scenes depicting their on-again, off-again relationship from elementary school to near middle age. Doug is constantly pulling some crazy stunt, like riding his bicycle off the school roof or climbing a telephone pole during a rainstorm, often as a result of being rejected by Kayleen or in a misguided attempt to gain her love. Kayleen isn't exactly a poster child for stability either. When she isn't slicing her skin with a box cutter or checking herself into a clinic for depression, she's flying to Doug's side to heal his wounds, but she never stays long enough to settle down with him. Though there is a clear attachment between them, these two klutzes are incapable of sustaining a healthy mutual relationship and only come together when one is in dire straits.

By the sixth scene of this 80-minute play, my attention had drifted and I thought, "All right, I get it already. He keeps hurting himself; she can't commit. They're both a mess." Joseph has a sharp way with dialogue and a compassionate eye for his hapless characters. I'm looking forward to the upcoming Broadway premiere of his "Bengal Tiger at the Baghdad Zoo," which was shortlisted for the Pulitzer, but his work here is repetitious and underdeveloped. We get a few details about Kayleen's unhappy home life—mother gone, father distant—but not enough to involve us in or make us care about her neuroses. Doug's background is even sketchier. Evidently he has supportive and loving parents, but he can't stop putting himself in harm's way, emotionally or physically.

Scott Ellis' taut production and the muscular performances of Pablo Schreiber and Jennifer Carpenter fill in quite a few of the blanks. Carpenter gives Kayleen just the right combination of dark edginess and spunky wit so the character's self-destructive behavior doesn't totally alienate us. Schreiber endows Doug with intelligence and tenderness, offsetting the character's macho bravado and reckless foolhardiness.

Set designer Neil Patel transforms Second Stage Theatre's usual proscenium, creating a narrow strip for a playing area. It resembles a hospital room, with the audience seated on two sides. Ellis knows how to economically move his cast around the minimal environment for maximum impact. It's too bad the playwright was too minimal in developing the characters.

Despite its shortcomings, the script is rife with material for scene-study class, so it might be worth your while to pick up a copy. Another valuable lesson the show can teach is what a strong director and cast can do with a skimpy play.