Guided Consideration of a Lamentable Deed 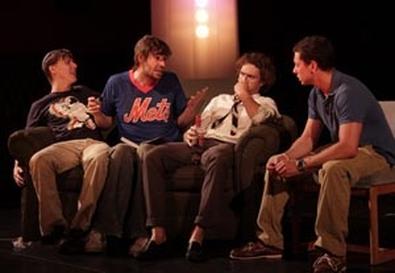 Our antihero, graduating senior Tim (Ben Kurland), commits a despicable crime the night before commencement: having sex with a coed after she passes out from intoxication. Owning up to his unconscionable deed takes him on a difficult journey of self-discovery. His smart-aleck classmates, clueless college instructors, and a lecherous janitor (the hilarious Ronald Conner) provide Tim with primarily warped input, advancing the script's cynical view of modern-day academia and perhaps society in general.

To set a mood of campus revelry, Southard effectively uses a funky venue: a vast warehouselike space, where free beer is served prior to curtain and a rock concert follows each performance. Chris Covics provides a sparse but atmospheric set and splendid lighting, enhanced by tall illuminated structures that support the play's edgy vibe.

Kurland makes a valiant effort to bring dimension to his role, but the character, as written, is mostly an unsympathetic dolt. Perhaps that's supposed to be the point, but there's not enough here to make his quest for comeuppance compelling. A character identified as Guide (Mattie Hawkinson) immediately breaks the fourth wall, functioning as a combination narrator and commenter. Hawkinson would do well to slow down her speeches. She races through text that's mostly cumbersome and verbose, sometimes making it unintelligible.

Standouts in the large cast are the pricelessly funny Edward Kiniry-Ostro and Terence Leclere as Jewish potheads trying to relate Tim's travails to biblical scripture, Isabelle Ortega as the fed-up wife of a philandering English professor (Kiff Scholl), and J.B. Waterman as a professor who graphically describes how he exacted draconian revenge on his emasculating wife.