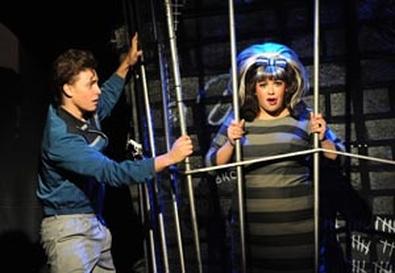 Victoria Morgan appears to be somewhat older than other actors who have tackled the role of plucky underdog Tracy Turnblad, the story's plump teenage heroine. Thankfully, the actor-singer invests the role with the requisite vocal prowess and likability. Yet it's Jim J. Bullock in the crucial role of ample-girthed suburban homemaker Edna Turnblad who most frequently sets the production ablaze.

Among the actors who succeeded Harvey Fierstein in this cross-dress role, Bullock finds the optimum balance between warmth and broad comic shtick. His consummate characterization beautifully dovetails with the clever antics of Barry Pearl, as Edna's beloved spouse Wilbur, particularly in their tongue-in-cheek love duet, "You're Timeless to Me." At the reviewed matinee, this vaudevillian showstopper included sidesplitting ad libs.