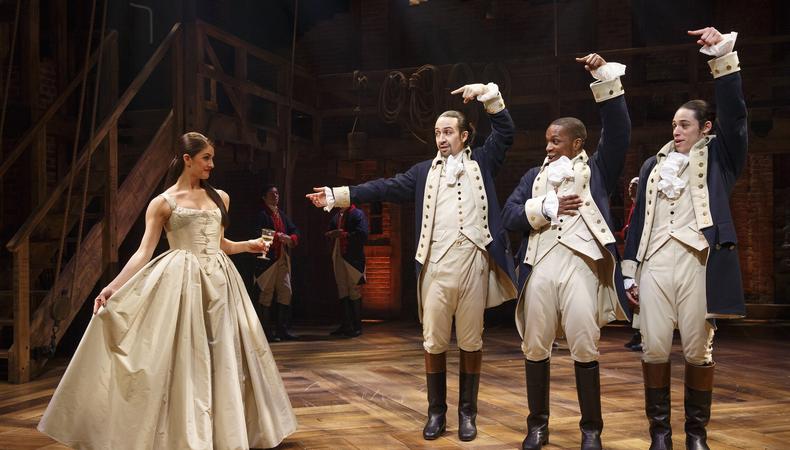 The winners of the 30th annual Lucille Lortel Awards were announced in a festive ceremony at the NYU Skirball Center on May 10. The event, co-hosted by Jesse Tyler Ferguson (“Modern Family,” Shakespeare in the Park) and Anna Chlumsky (“Veep,” “Living on Love”), honored the best of Off-Broadway theater in the 2014–15 season.

As expected, Lin-Manuel Miranda’s “Hamilton” did considerably well, sweeping every category in which it was nominated, including outstanding musical and director. The Broadway-bound musical set a record for the most Lortel nominations for a single show, winning 10 out of 12. Meanwhile, Roundabout’s production of Fiasco Theater’s “Into the Woods” won outstanding revival, and Stephen Adly Guirgis’ Pulitzer Prize-winning “Between Riverside and Crazy” earned outstanding play, lead actor for Stephen McKinley Henderson, and featured actress for Liza Colón-Zayas. Outstanding lead actress in a play and musical went to Tonya Pinkins for “Rasheeda Speaking” and Phillipa Soo for “Hamilton,” respectively. For the first time in the awards’ 30 years, every acting award was given to a person of color.

“Race in America is a conversation that everyone wants to have,” said Pinkins in her acceptance speech. “It’s an invention of America; Thomas Jefferson asked scientists and doctors to invent the concept of race in order to justify human bondage in the land of the free. So I am glad to be here to receive this award for this play written by Joel Drake Johnson called ‘Rasheeda Speaking,’ which I hope begins to plant the seed to change this propaganda that threatens to tear the fabric of our United States.”

Terrence McNally accepted the Lifetime Achievement Award, describing in his moving speech how he met F. Murray Abraham and Micah Stock, the actors who introduced him. “I am deeply, deeply honored,” he said, concluding by thanking his high school English teacher. “She taught us that Shakespeare could be my best friend for my life. And that is the greatest gift you can give a 14- or 15-year-old, the gift of Shakespeare, the gift of theater, the gift of that community that only theater can create; being in a room together like we are now.”

The Edith Oliver Service to Off-Broadway Award was awarded to general manager Nancy Nagel Gibbs, who was given a touching introduction from James Monroe Iglehart. Jeanine Tesori, whose show “Fun Home” won outstanding musical at last year’s ceremony, became the first female composer inducted into the famous Playwrights’ Sidewalk with a plaque outside the Lucille Lortel Theatre. “I have lost so many awards in this building,” she quipped. “Making work above, below, behind a musical is unbelievably difficult. I appreciate anybody who wakes up and does work. Awards, this stuff, they’re beautiful shiny things. But the real shiny thing is the work.”

The Lucille Lortel Awards were created by the Off-Broadway League in 1985. The voting committee is made up of members of the League, Actors’ Equity Association, the Stage Directors and Choreographers Society, the Lucille Lortel Foundation, and other theater professionals and journalists. For more information, visit LortelAwards.org.

Father Comes Home From the Wars (Parts 1, 2 & 3)
Produced by The Public Theater in association with American Repertory Theater
Written by Suzan-Lori Parks

The Nether
Produced by MCC Theater
Written by Jennifer Haley

Outstanding Musical
The Fortress of Solitude
Produced by The Public Theater in association with Dallas Theater Center
Book by Itamar Moses, Music and Lyrics by Michael Friedman
Conceived by Daniel Aukin, Based upon the novel by Jonathan Lethem

Hamilton
Produced by The Public Theater
Book, Music and Lyrics by Lin-Manuel Miranda
Inspired by the book Alexander Hamilton by Ron Chernow

The Lightning Thief
Produced by Theatreworks USA
Music and Lyrics by Rob Rokicki, Book by Joe Tracz
Adapted from the book by Rick Riordan

Into the Woods
Produced by Roundabout Theatre Company in association with McCarter Theatre Center, a Fiasco Theater production
Music and Lyrics by Stephen Sondheim, Book by James Lapine

Jack Smart
Jack Smart is the awards editor at Backstage, where he covers all things Emmy, SAG, Oscar, and Tony Awards. He also produces and hosts Backstage’s awards podcast “In the Envelope” and has interviewed some of the biggest stars of stage and screen.
END_OF_DOCUMENT_TOKEN_TO_BE_REPLACED